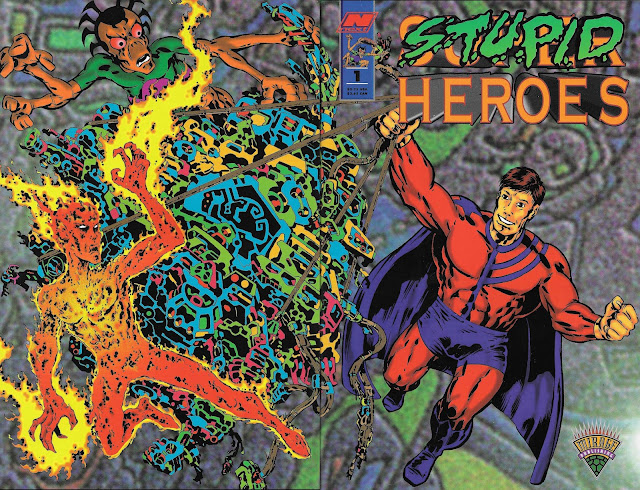 A Kirby-riffic tale that isn’t stupid at all

I don’t think fed up is exactly correct, but when I hear this quote all I can think is “that guy is fed up with drawing turtles.”

The book it comes from fell into my possession by leaping off the shelf at Half Price Books when I was perusing the graphic novels and into my shopping basket. I was happy it committed product suicide, because had I seen it, I would have snatched it up in single stroke of my heart. The book is something every comic historian should own a copy of.

Aside from the help it gives me in a general sense, the book has an interview with Peter Laird, one-half of the troop that created the Teenage Mutant Ninja Turtles. This was back in 1993 and Laird was fighting through what he terms “a burnout from the intensity of the Turtles experience.” Seems the Turtles were a winning lottery ticket in more ways than one. As the various properties split off from the success of the comics, there came an increased stress on Eastman and Laird to become businessmen overseeing a corporate empire.

Laird got to a point where he had to “admit to myself that I got no enjoyment out of drawing anymore…it really freaked me out.”

Thankfully by 1994 Laird did give a new concept a try. Putting pen to paper both in art and story, the product that came out is this issue of S.T.U.P.I.D. Heroes. The book leans heavily on Jack Kirby and the old Marvel house style of the 60’s. If you are prepared for that, settle back and enjoy this ride. I found the book comforting and enjoyable, as elements from old school art, such as the use of lots of forced perspective shots, work well when placed alongside newer storytelling techniques, like smaller panel counts per page.

Thus the book is both throwback and modern, so much so that I’m sure 90’s audiences couldn’t make heads or tails what to think of it. Me, I think it’s just dandy. Let’s give you a taste and see if you agree. This is our opening, which is brimming with classic goodness. I love the deliberate placement and positioning of every character in panel from the urgency and thrust of the man in the ballcap’s flight to the terror in the old man’s astonished face.

I love the fact that the entire page is topped by a sign that says “Antiques.” That last bit feels so intentional. Here are comics like you don’t see them anymore. I’m drawn in immediately. I’m also reduced to nine years-old again, in a good way.

We turn the page to find Laird really delivers. Here stands an enormous two-page action scene of our antagonist, aptly named a “Mayhem Machine,” tearing through an armored car. We get the name of our hero (Poundstone) and then we are off to the races. 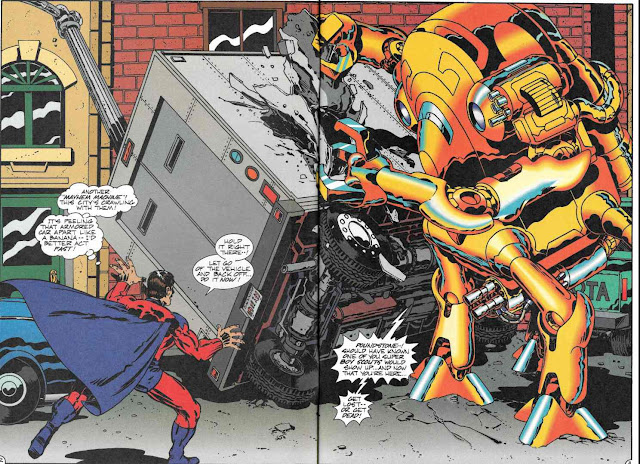 Our hero calls for the villain to surrender. The villain instead turns an ineffectual weapon on Poundstone. Love the color shading being done on these pages too. The vibrant four-color style really sells the look. 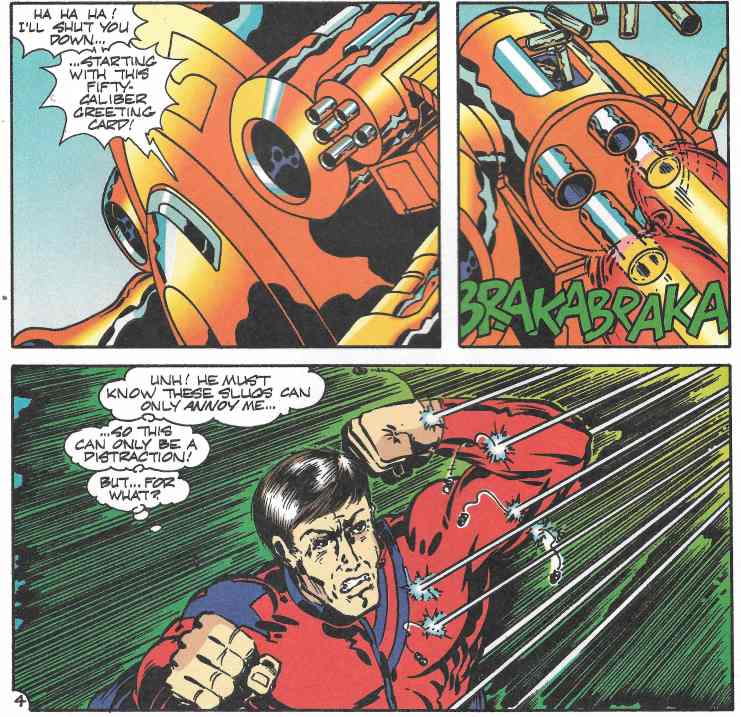 Since these slugs couldn’t hurt Poundstone, he knows it’s just a distraction. Sure enough, our goggled menace splooges on the poor superhero. 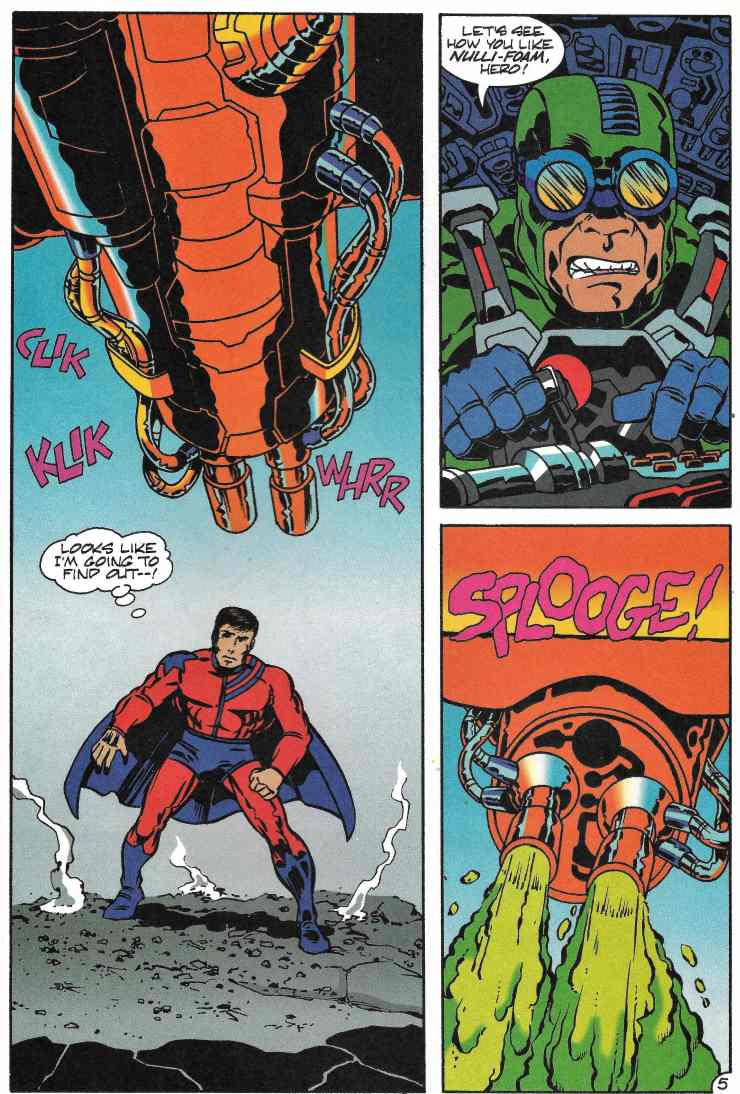 This action sequence, like some Nickelodeon kid's special gone overboard, doesn’t contain the menace that the gunfire did, yet fills that same niche of definitive Superman-in-peril goodness. I’m kinda in hog heaven with this bit. 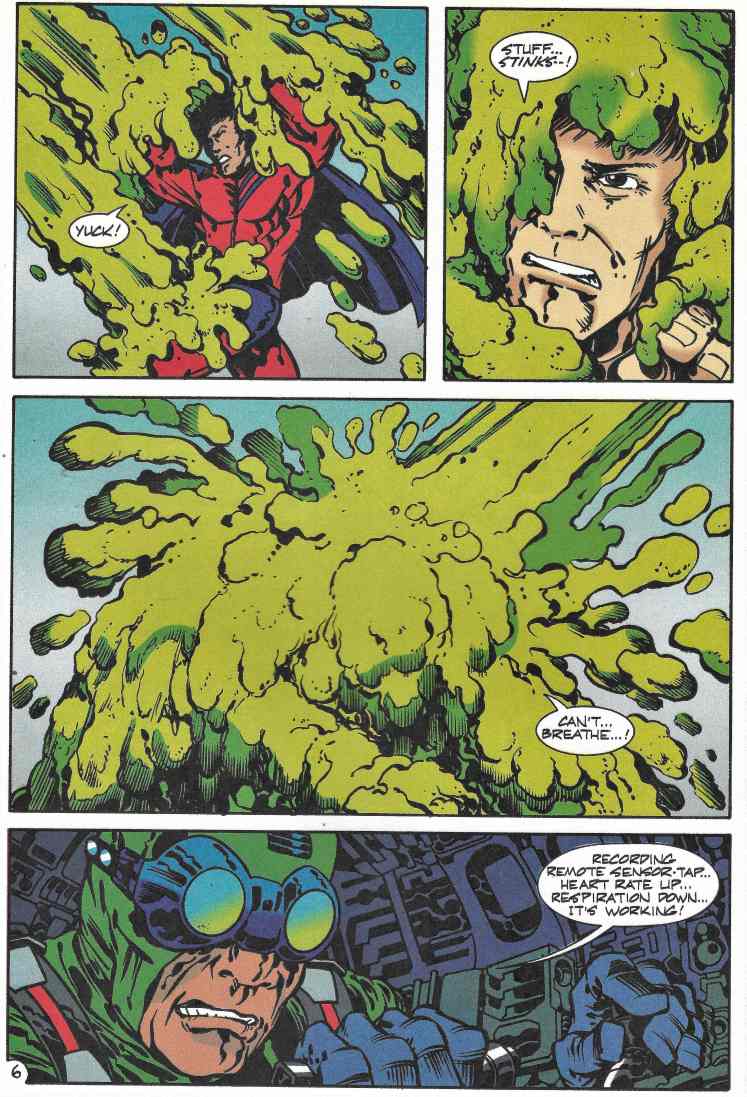 Also note how intricately Laird is laying on the Kirby-tech in the machine’s cockpit. And the more I see the bad guy, the more I get parademon vibes. It works as homage and as a fresh take on a vintage look.
Of course Poundstone wouldn’t be worth his salt if he was stopped by what amounts to a spray of green-tinged Fix-A-Flat. So of course we have a great scene of him bursting free, complete with white hot background effects. 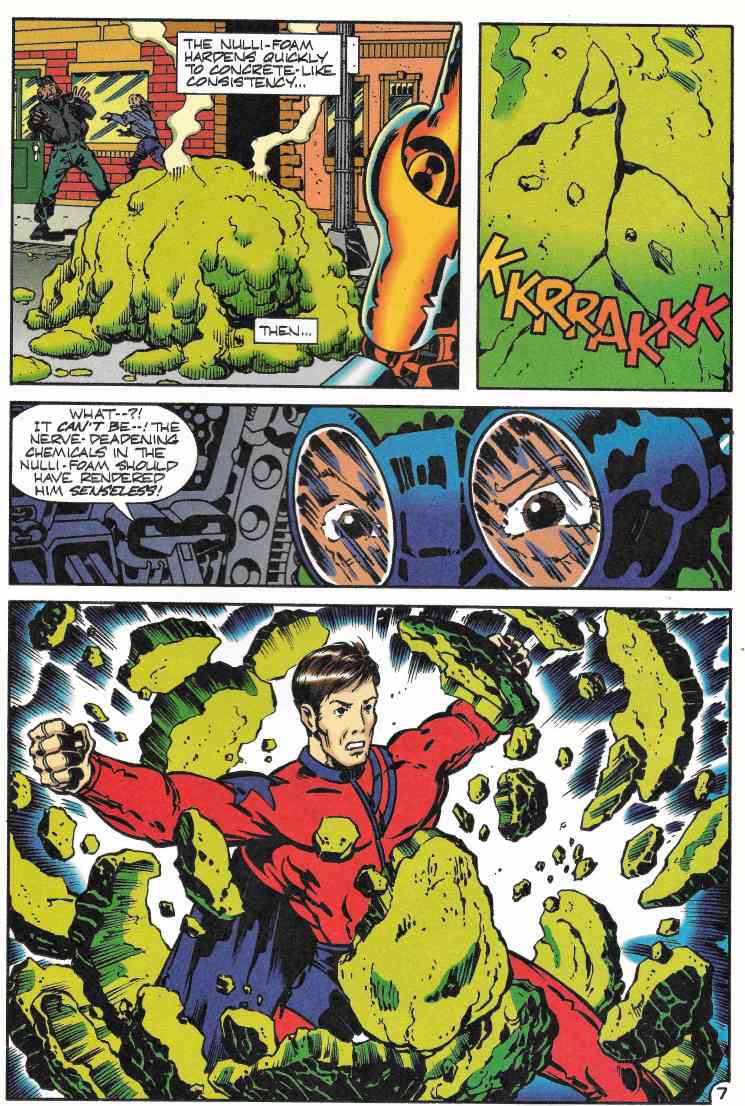 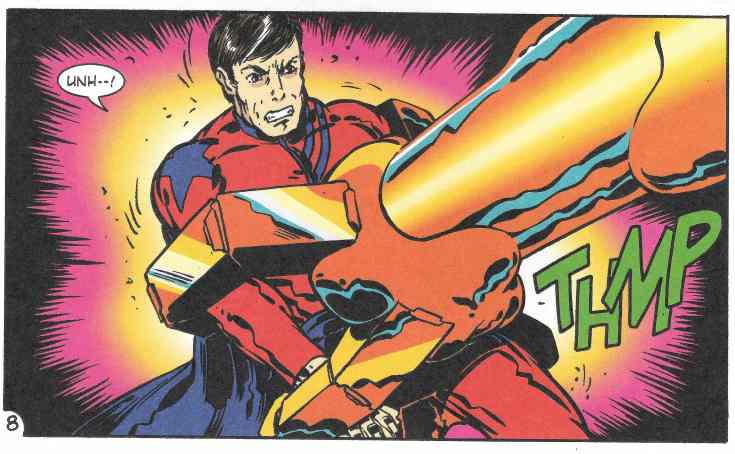 …which doesn’t quite have the desired effect, I’m thinking. 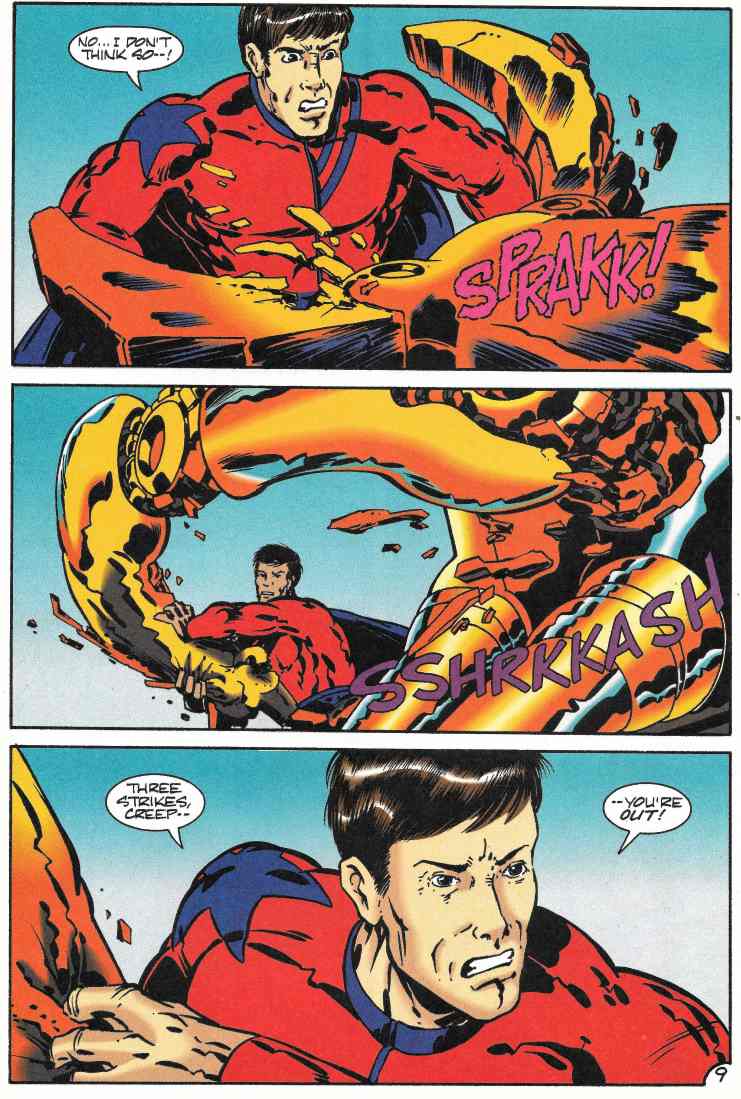 It also gives us a few panels of Poundstone pounding the Mayhem Machine into itty-bitty pieces, before catching our crook.

Note our page count: 10. We are 10 pages in and know next to nothing about these characters beyond black and white good vs evil terms. Yet there is something compelling about this story from that simplistic viewpoint given the art style. It is plot mirroring substance, as the basic storytelling mechanics are broken down to bare minimum the same way the art is a throwback to a less complicated time. 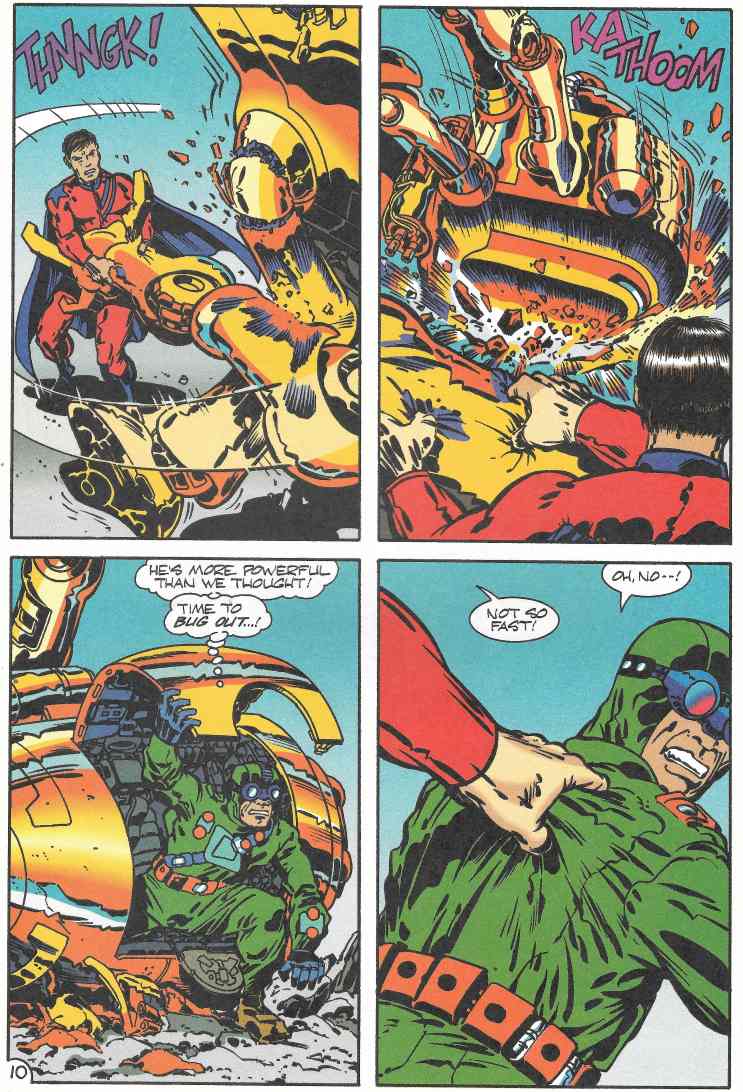 The book is distilling the essence of the superhero story. Words from Jack Kirby that Laird includes on the frontspiece of the story: “Just have fun with it!”

Indeed, the book looks to be having a lot of fun with the rudimentary building blocks of a superhero story. It is like a Roy Lichtenstein pop art festival distilled back into comic book form. It’s history and art served up in manner that should speak to the soul of all comic readers. 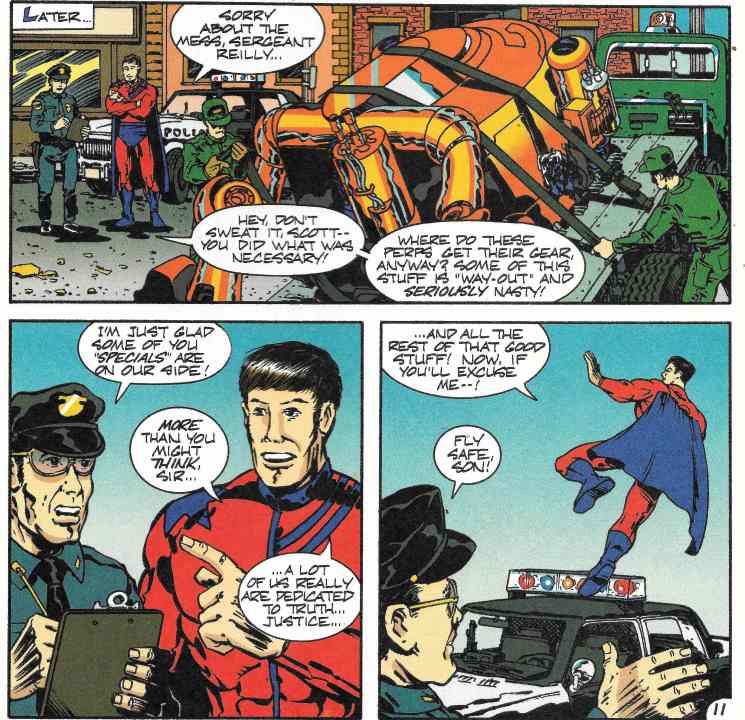 It isn’t until page 12 that Laird starts adding in more complicated concepts and for once, I’m fine with that delay. He restarts the comic with a second full page panel that introduces a second superhero, this one a cross between Doc Ock and BatGirl. And to prove we are evoking the 60’s era X-Men and Fantastic Four we have a mash up of the Danger Room and Doctor Doom’s handle. 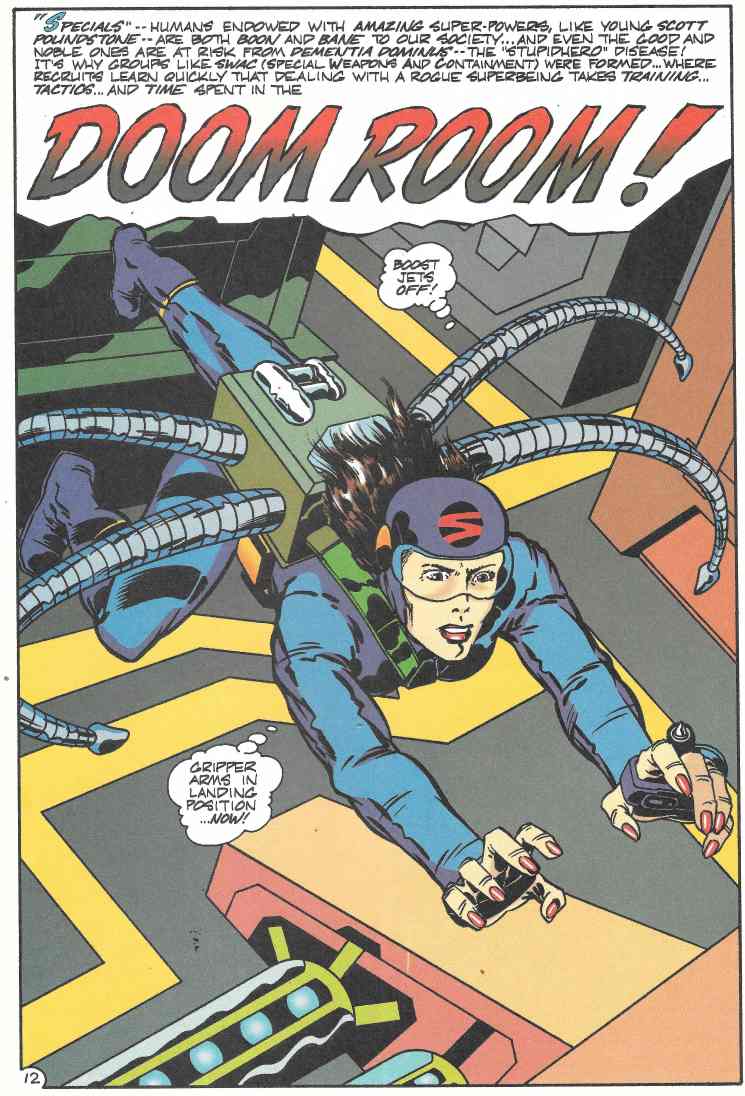 Our six armed heroine Alana quickly gets into trouble trying to make a swing from one building to another. 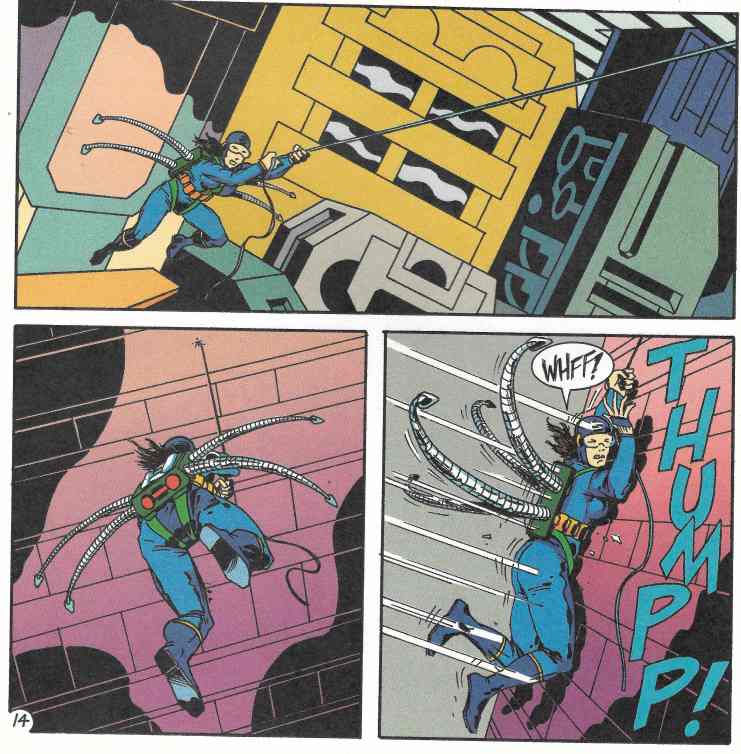 …and in the Doom Room, one missed routine can be fatal! 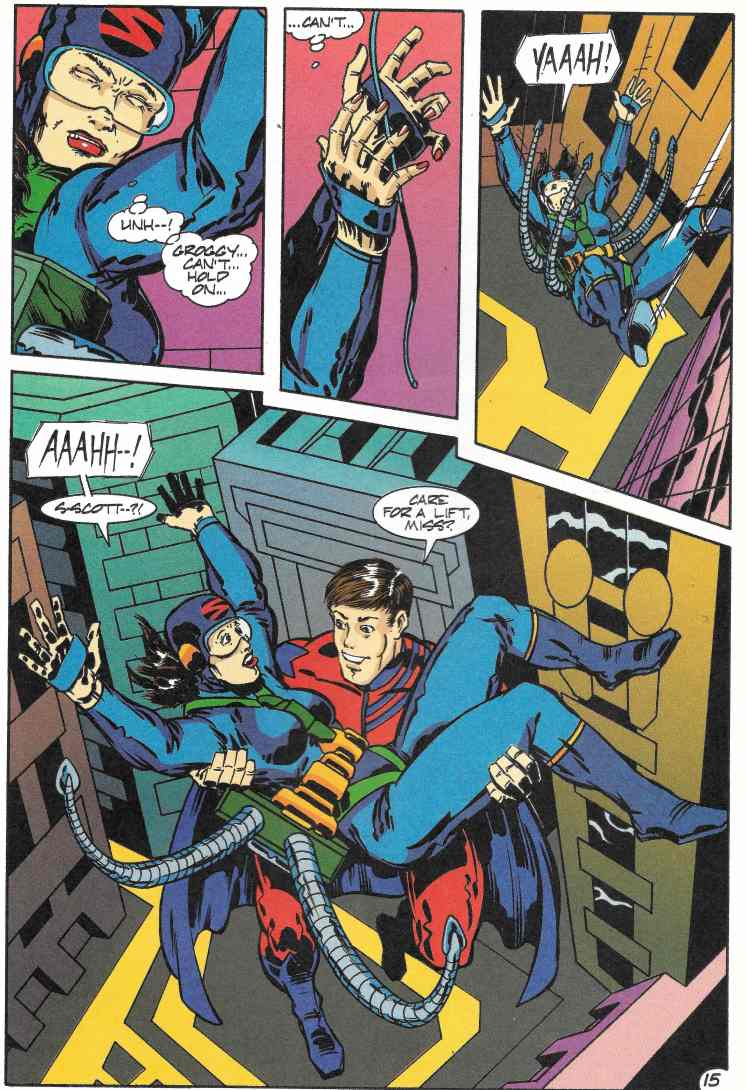 Except she’s saved by Poundstone at the last moment, a potential romantic tangent being added between the two of them. 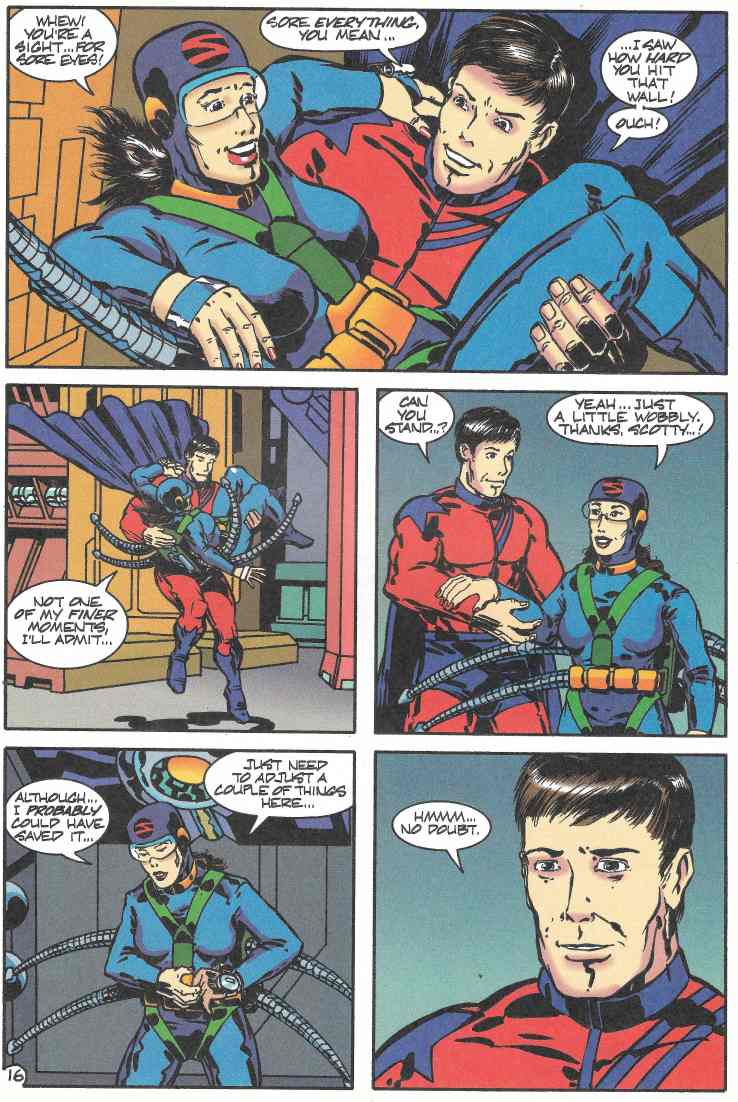 I like the minimalist touches added here that start rounding out these two as characters. Alana shows determination and guts. Scott displays
Humor and kindness. Laird begins small and starts working his way out from there. 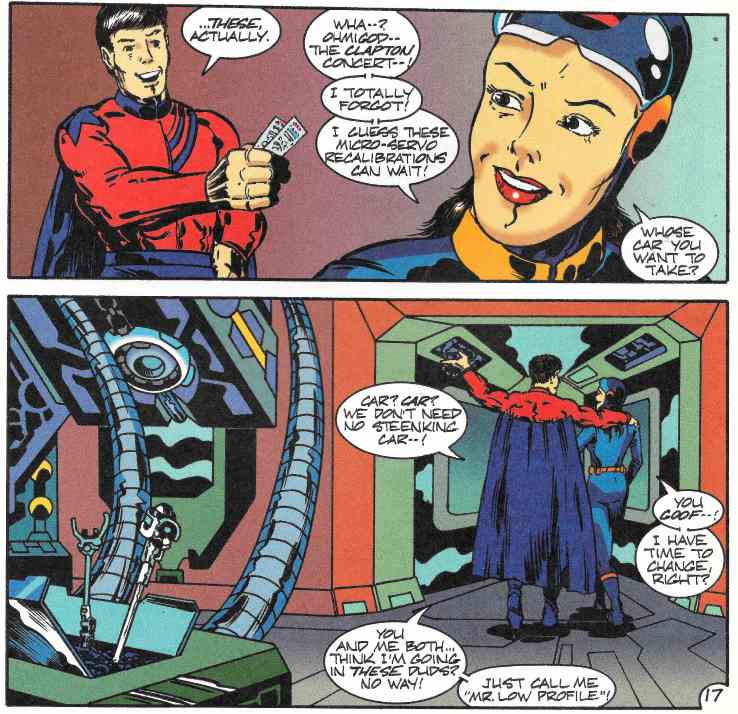 As our pair exit to a Clapton concert, we move over to a second splash page showing three heroes on a talk show. Keep your eye on Cinder in the middle. Something tells me he’s going over the edge soon. 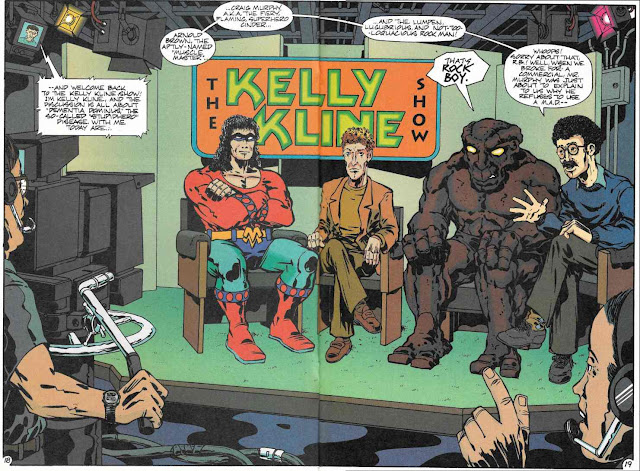 We learn from the host that each superhero is “monitor” by this weird ball-shaped device to tell if they are crazy or not. Cinder doesn’t use one and the host presses him to use one on air to prove he is mentally stable. 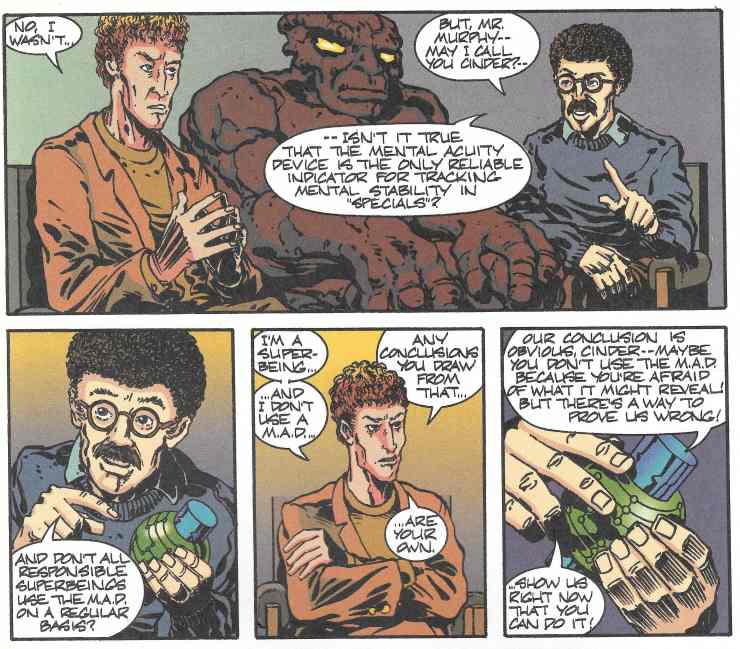 Cinder takes one and does just the opposite. 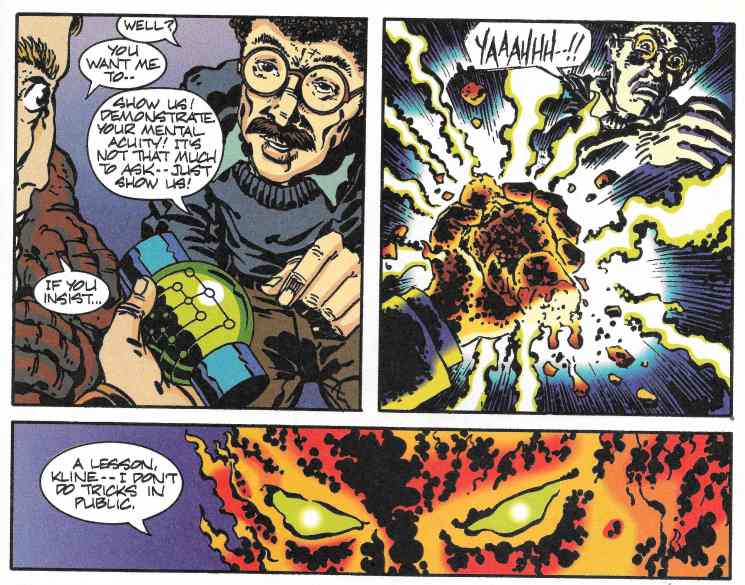 After which he wordlessly stalks out of the studio. Love the way Laird frames this. 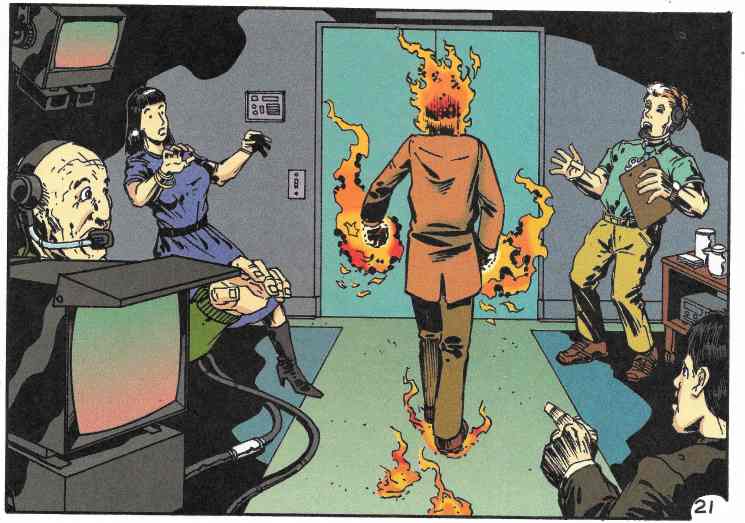 And we end on a tech pulling a black box from the Mayhem Machine shown in the battle with Poundstone. The tech is greedily rubbing his hands at the information it contains (which could be either data on the machine or on Poundstone’s weaknesses) before a guard comes along and makes him close the door. A cliffhanger clue being the name of the project they are working for, methinks. 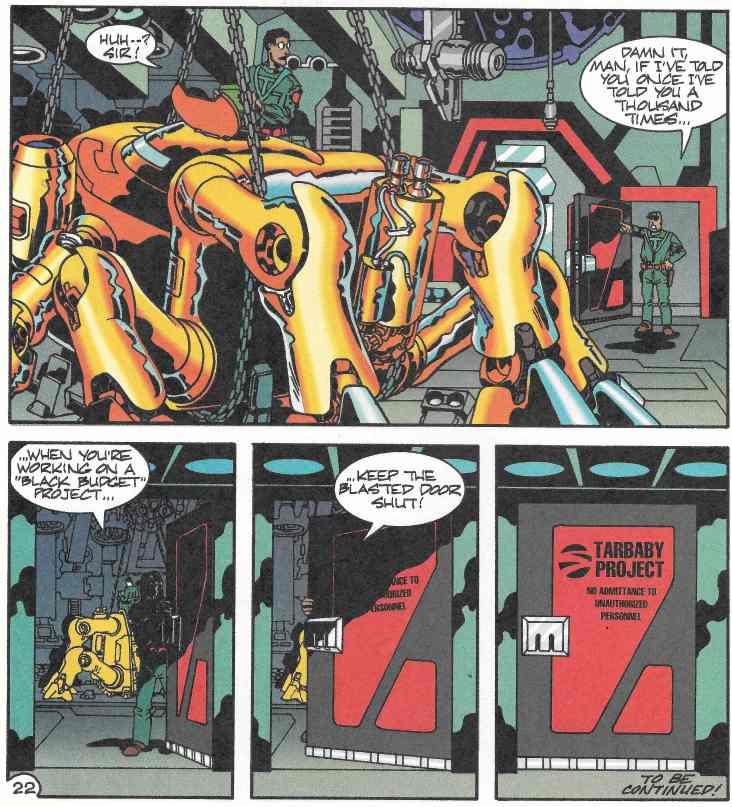 And that’s it. The issue is really lite on story. And it’s also not creating deep characters or complex plot twists and turns.

But what it lacks in those respects it makes up for in atmosphere. The book doesn’t fall back on being a pastiche of every Kirby-ism going. Laird doesn’t force himself to write like Kirby, or like Lee interpreting Kirby, or like anyone other than himself. He steals the look he needs from Jack’s art style, takes the pulp-era story-telling vibe, and then allows the book to unwind at a leisurely pace and with a unique tone.

It is its own deal that works for me on a very visceral, gut level. What more could you ask a book to do?
Posted by SonOfCthulhu at 8:25 AM