The Fairer Sex
Maggie the Cat #1 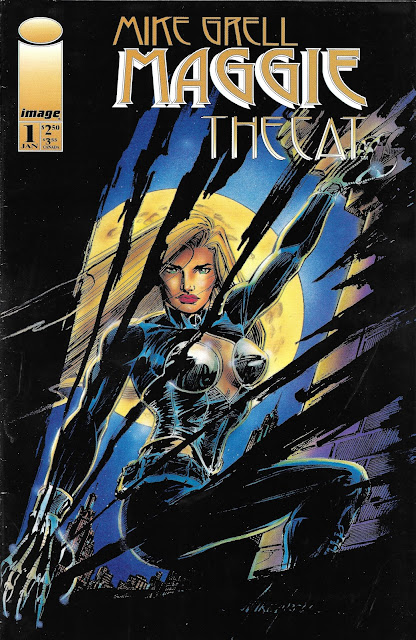 Mike Grell does it again (heck, has he ever NOT done it?)

In 1987 I had no interest in Green Arrow. DC and Marvel both had brash, big talking archers who used trick arrows to fight super criminals. And being a Marvel guy by-and-large, my preference fell on the side of following Clint Barton’s Hawkeye around with his Avenger buddies.

At least until Mike Grell came along.

Realize that the mid-80’s was the point where I became a “serious” collector of comics. And by that I mean that I began looking at the creators and following artists and writers more than characters. I hadn’t truly encounter Mike Grell’s impressive pencils and intriguing storytelling at this point.

All of that would change with the prestige three-issue Green Arrow: The Longbow Hunters mini series. The square bound books with their impressive colors turned me into a purveyor of all things Ollie for several years thereafter. Grell took Green Arrow in a direction away from the jokey trick arrows and into Batman-caliber vigilantism. I can still see Ollie threatening one mob boss with his bow cocked and a steel tipped arrow notched, surrounded by the boss’s goon squad aiming guns at Ollie. Green Arrow reminded the gangster that with an arrow all you had to do was let go. Grell made Ollie badass again and that carried him to an ongoing that lasted 80 issues worth of writing credits.

Grell moved on from the title to draw a James Bond adaptation for License to Kill and then do an original story for the British secret agent as both writer and artist Both by Eclipse. He dabbled with a creator concept book called Shaman’s Tears, many of which have shown up in the Crapbox but I’ve been too busy to pull out and read. (Upon closer reading of the afterward, it appears Maggie debuted in issue 12 of that series.) However, after one read through of Maggie the Cat, I’m thinking those are going to get dug out pretty quickly.

Grell shows that he can craft any concept into a great, engaging story. Even something that smacks of the same 90’s flash and sexism that litter so many book titles of this era. Don’t let that hot blonde on the cover fool you, this isn’t an empty-headed tale. Grell has cooked up quite a delicious dish for us. But I should just let you to the table instead of boring you by gushing about it. You’ll see for yourself soon enough.

We begin our tale in sunny Scotland, on the castle grounds of the Greymalkin estate, with the arrival of Ryan James and his weekend guest, one Miss Elanore Hensley. Hensley has been here before, it appears, which is a surprise to James. It appears she know the former Lord Greymalkin. The current Lord of the castle is… 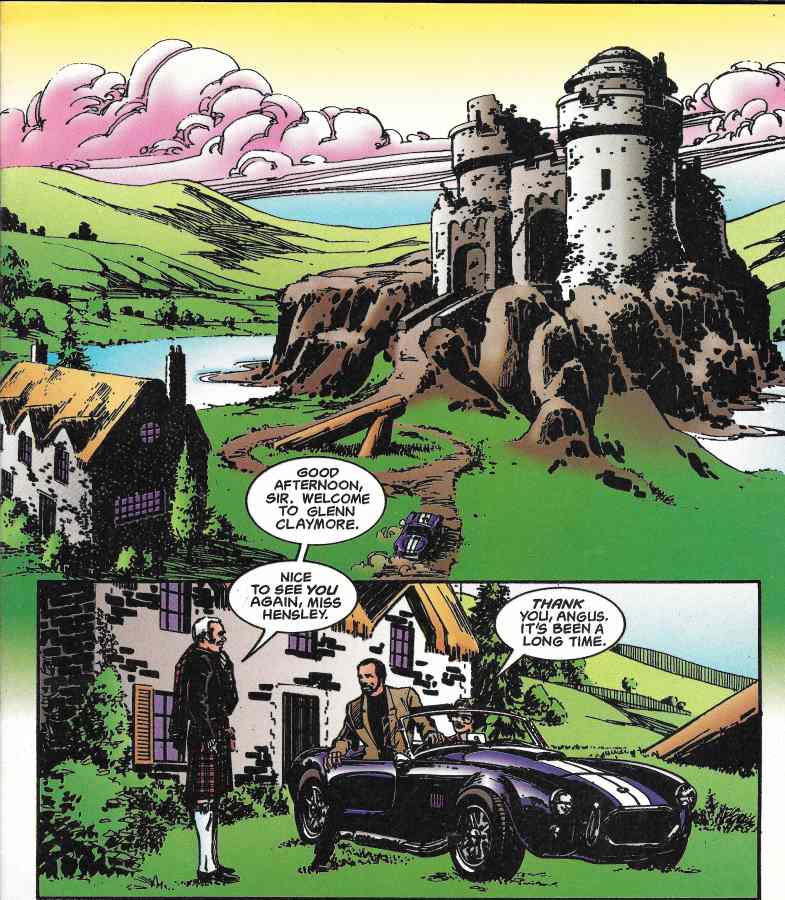 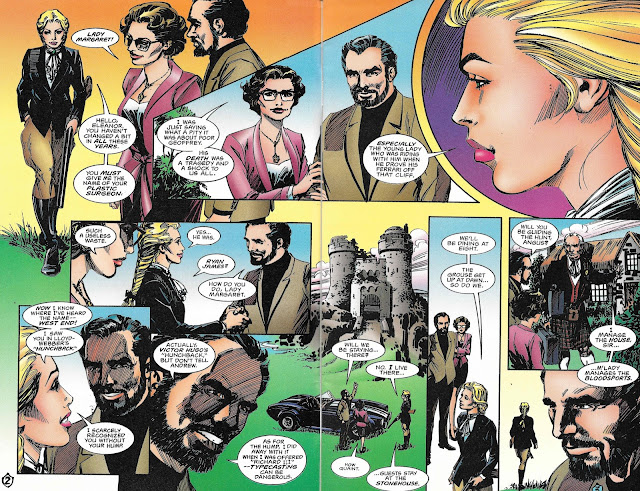 It’s also at this point that I realize that showing you my carved up, slice-and-dice windows into Grell’s stunning page layouts isn’t going to cut it in 99% of the cases for this issue. This is what you get when you give Grell free reign on the page. An organic flow that will not be bound by panel boarders or traditional boxy rectangles.

But unlike most of the other showy books sharing mid-90’s shelf space with Maggie the Cat, Grell’s art is used in service of the story, not to distract from it. Lady Margaret’s stride and poise as she makes her appearance tells us she’s a strong commanding woman, James’ suave good looks and charm are clearly on display, as is his attraction to Maggie show in his appreciation of her backside as she exits the final frame in this sequencing. Also of note is that the arriving couple are ushered into the quaint looking guest house, while Maggie goes to stay in Greymalking Castle, certainly playing up the Lady’s isolation and defensiveness. 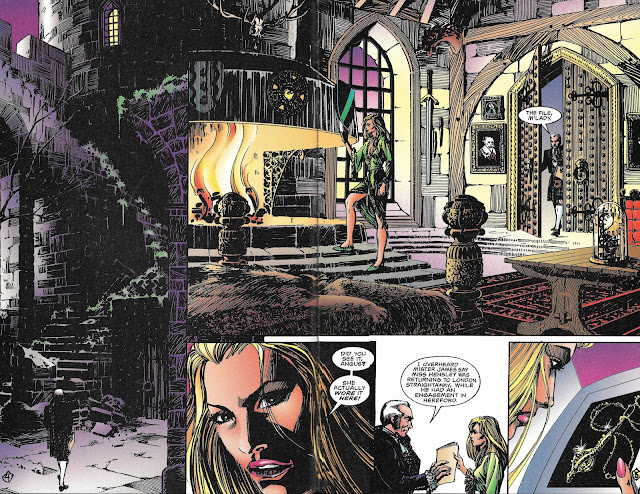 And because I cannot bear to cut any of this out, we next watch Maggie’s manservant bring her a file in her room at the top of the tower. Note all of this is metaphoric as well as atmospheric. Butler Angus represents one of the few people Maggie trusts in any real way. She has locked herself away from human contact in this tower rather than spending more time with her guests.

It soon becomes apparent why: the necklace that Hensley wore upon meeting the Lady holds some special interest for her. Almost like Hensley was flaunting that she owned it. The brazenness of this action brings up a fire in Maggie to match the one in the hearth and Angus quickly lets her know of the couple’s next destination – Hereford.

And so we watch as Hensley goes out for a night on the town in Hereford, leaving behind a very valued necklace and a very determined and skillful Maggie. 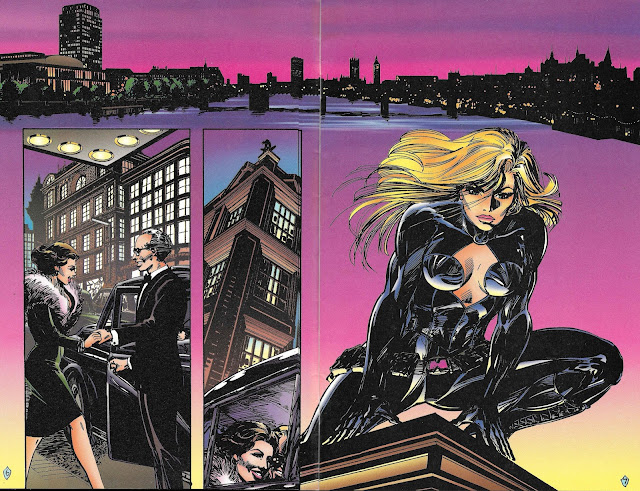 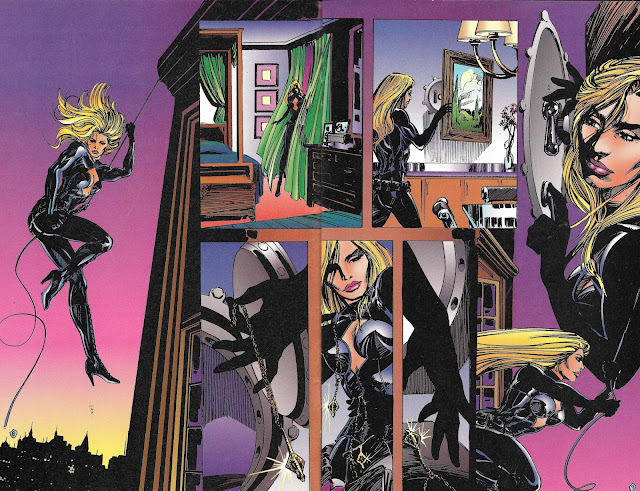 Couple of things here: in watching this sequence it becomes easy to get distracted by the thought that what Grell was meaning to convey was that Maggie was a professional cat burglar before wanting to get back her late husband's rewards to his lovers, and perhaps he was doing just that. However, he clearly setup that this isn’t “just business” for Maggie. There is a personal stake in this related to the history of that necklace and Lady Margaret, that much is clear.

Additionally, ISN’T IT JUST FREAKING GORGEOUS? This is classic, unfettered Grell at his best. Typically I don’t appreciate page after page of wordless action sequences of any type, but Grell’s work always stands out as the exception to that rule. Mainly because he understands visual plotting and his stuff is never boring. This isn’t a few pages of random poses, this shows a natural progression of story in a visual format. What’s astonishing to me is that Grell does such a good job on both writer and artist sides of the table to get sequencing like this just right. It draws you further in to the tale and wondering what Maggie will do next. 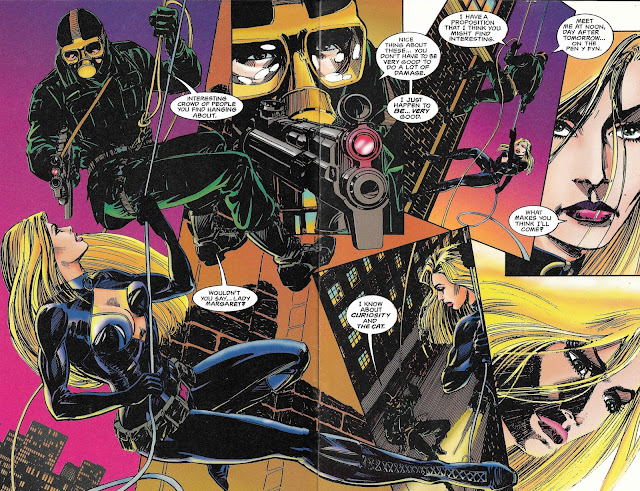 Which is get caught by a gun-toting man hanging out the window who knew she was coming. This whole necklace as bait turns out to be a setup to test Maggie’s abilities it seems, because rather than arrest her or even stop her, the military-green clad gentleman just offers a meet-up two days hence to discuss an opportunity that he believes Maggie will find interesting. At this point I’ve pushed all my chips in on wagering this tale is a winner. Great art and a solid story hook has me captured as tightly as Maggie as captured that necklace.

One of the real thrills of Grell’s storytelling abilities is his understanding of how to use wordless panels to establish a setting, convey action sequencing and move a story forward. Not one dialogue box or thought bubble mars this page and yet we get a perfect understanding that this is our meet-up point and this is the mysterious man in green who offered Maggie the chance at an interesting job opportunity. Grell lets his art do all the talking and he has the considerable skill for the message to come through loud and clear. 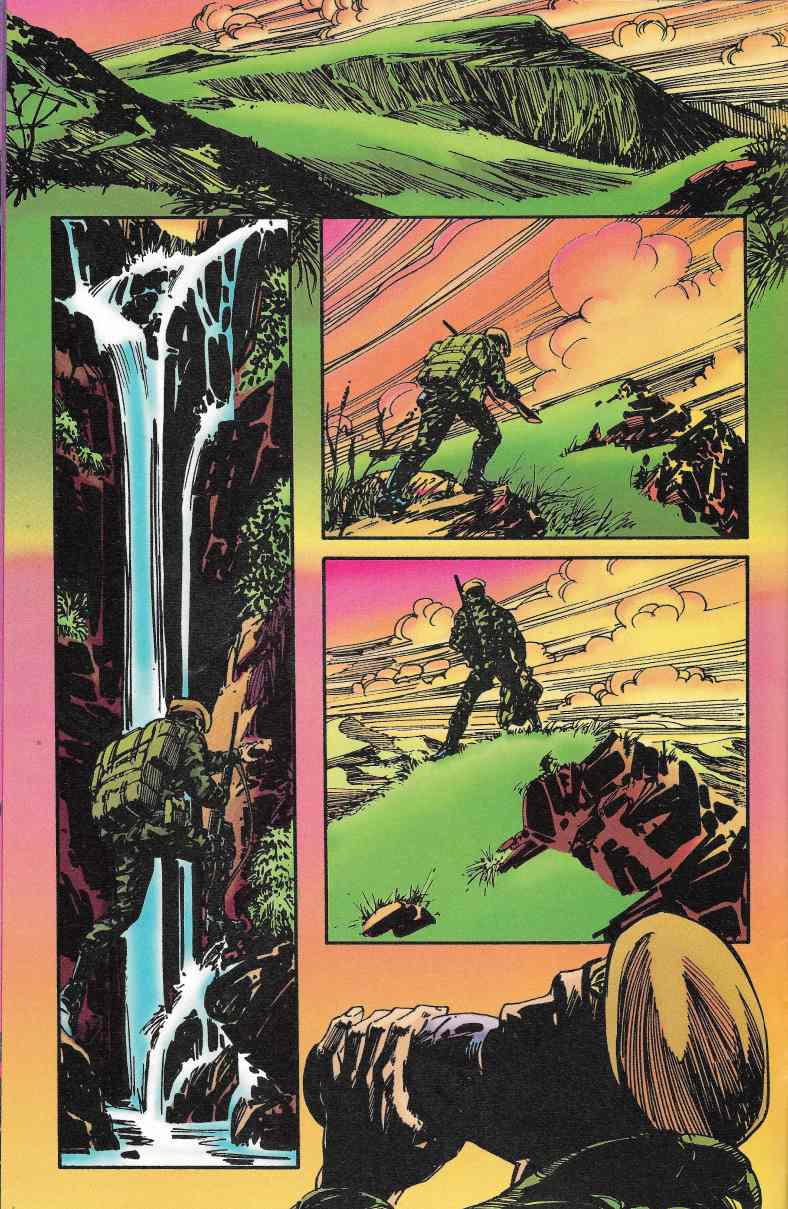 And when the waiting solider gets jumped by a camouflaged Maggie, again Grell gives more power to his images than any amount of voice over. These scenes sell the book for me and it really is all because the art is fabulous, panel after panel. So our actor friend is also a secret special agent for the British Army? Interesting development. 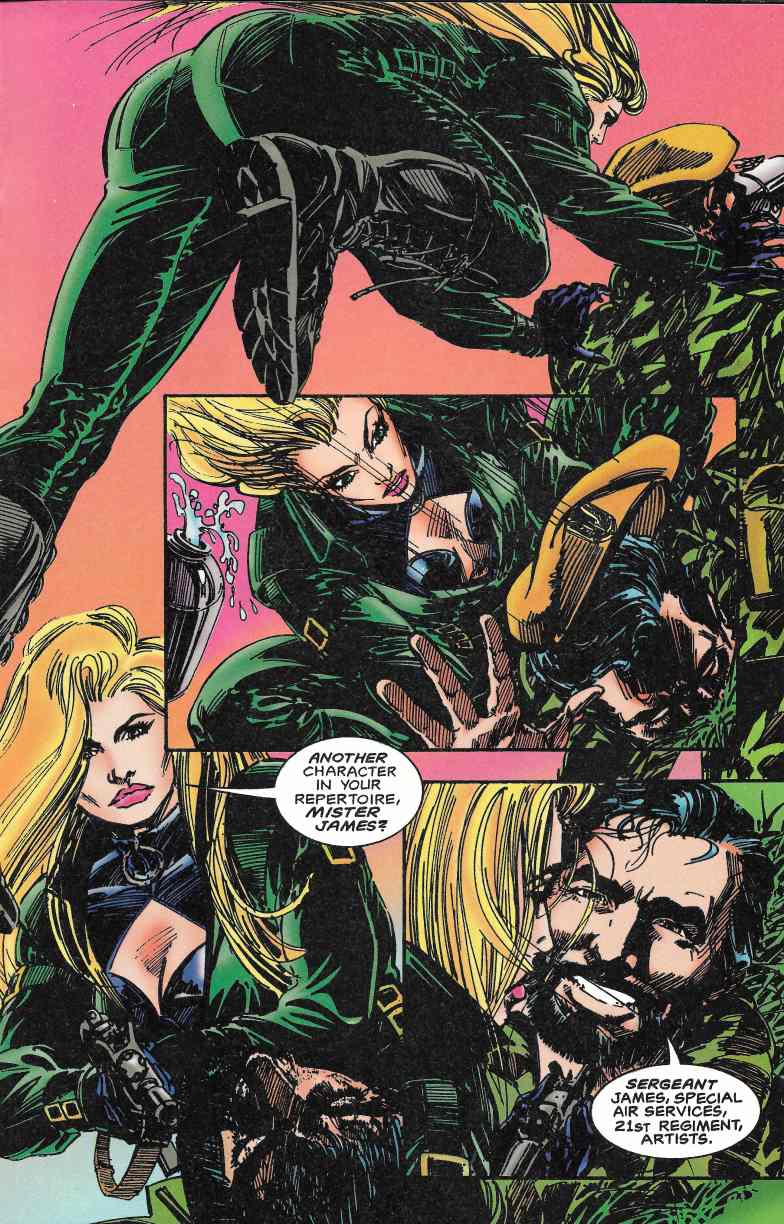 And with this we follow a little into both Maggie’s background and James too. Grell weaves both stories together as we find the British government doesn’t really care about bringing Maggie in for her many, many crimes, most of which it is interesting to note come with the moral caveat of being jewelry her late husband gave away to his many mistresses it appears. Gotta have a bit that makes Maggie’s morality a tad more on the side of the angels. But now comes the real offer: using Maggie’s many skills in service of the British government. This is like an updated “It Takes a Thief” and I can totally dig it. 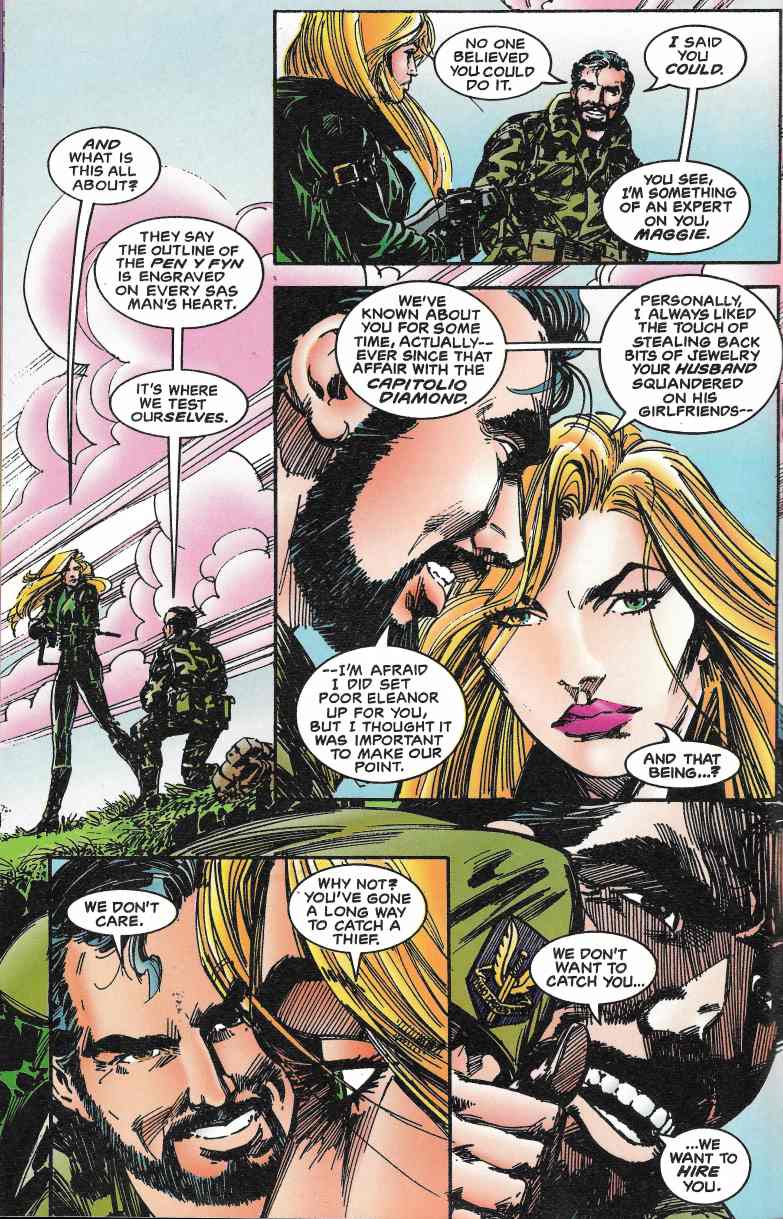 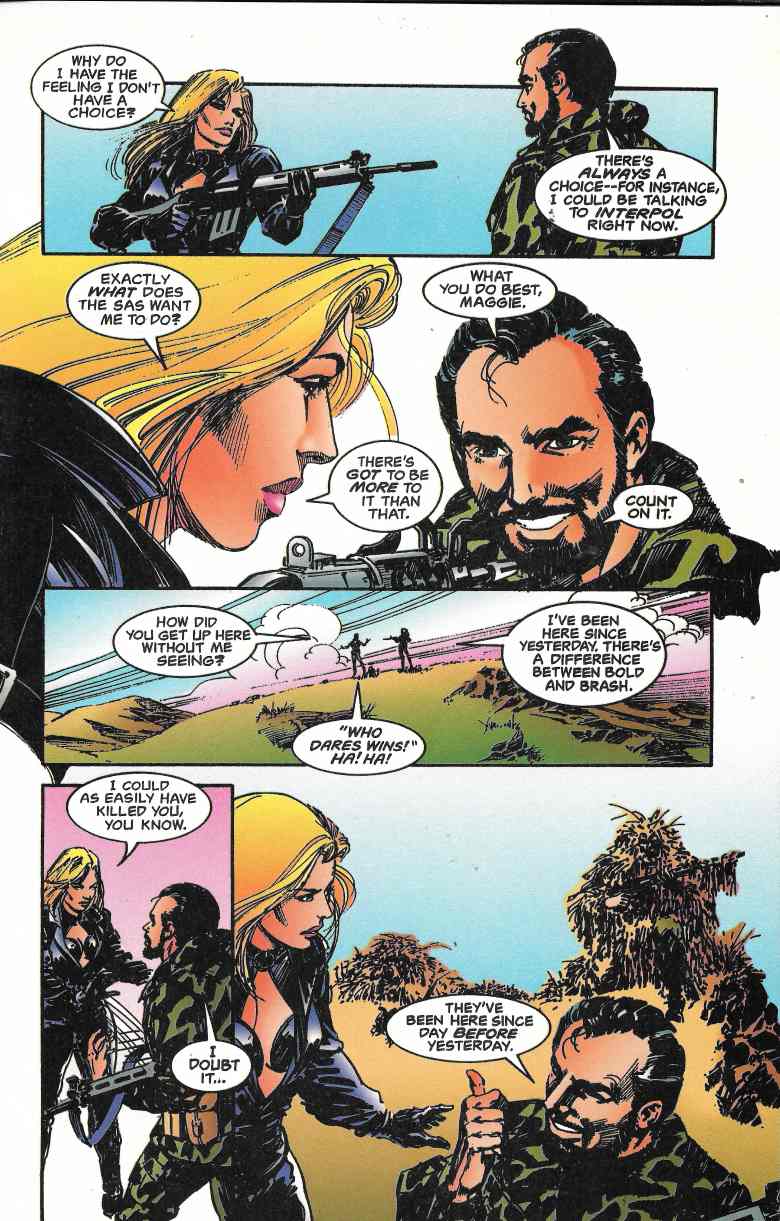 Maggie realizes she really doesn’t have any options. James lays out the mission she is to be tasked with and it revolves around stopping one of Hitler’s supporters who has moved on to leading terrorist armies in the wake of WWII. Neat idea for a villain although I’m not too certain that Maggie is the bloodthirsty sort. I’m giving this time to grow into a reasonable story. 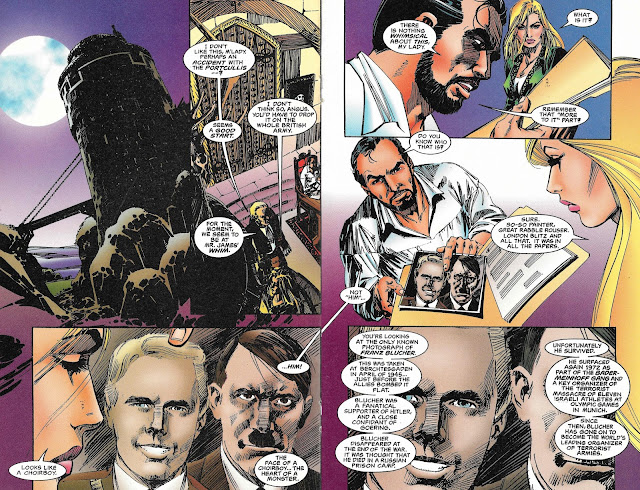 What I’m not doing is excusing the one layout issue that stops this book from being a perfect 10. The bottom left panel is supposed to be read after the top two on the right. Followed by your eyes then returning to the bottom right.  That isn’t a natural flow around the page. I understand why Grell is making the choices he is about dramatic placement of the reveal center page, but I read this wrong the first time through. That’s important because first time read-throughs for me are just for enjoyment. I don’t mark books too review or not until I know what they contain.

Now this isn’t a “throw the book away” kind of mistake, but it needs to be pointed out. It is kind of a design flaw from someone who isn’t known to make design flaws. I get it though: big reveal near center of page and then use a mirroring with focus on the left picture to make up a more dramatic “pull in” effect on the right. Grell really gets how to pack a punch, this one haymaker just went a bit wild in execution.

But next is a blow that connects. After listing off all the places this Hitler-era bad boy might be spending his final days and all the people Blucher has hurt over the years, James accentuates the point he came to make. Namely, that Blucher plans on going out with a bang and taking a lot of innocent lives with him in the process. 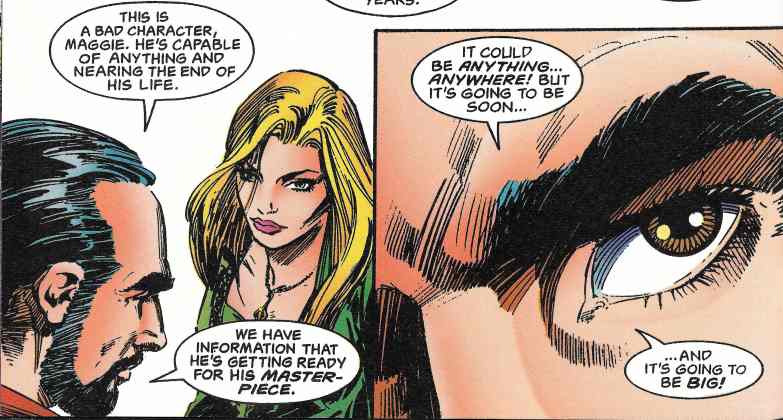 The second part of this knock out is that British Intelligence knows where Blucher keeps his most prized possession: a priceless Vermeer painting presented to him by Hitler himself. The mission for Maggie is to steal it so that it can be presented at auction…and intelligence can follow the painting right back to Blucher’s doorstep. 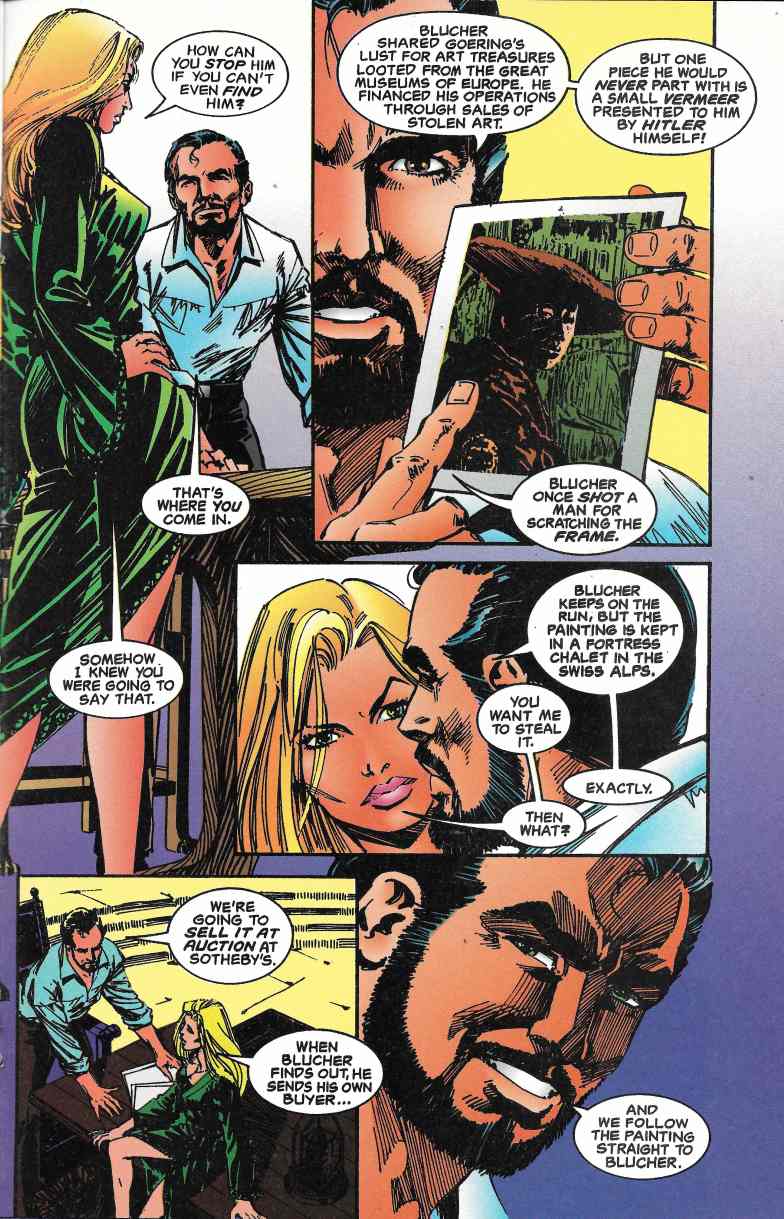 And this story’s James Bondian twist would not be complete without a little nod to the Q Branch (duly noted in the narrative) with a gizmo that will make Maggie the most cat-like cat burglar ever. That bottom panel framing sequence is amazing, specifically showing how it might be James that is really caught in Maggie’s claws with some subtle positioning. 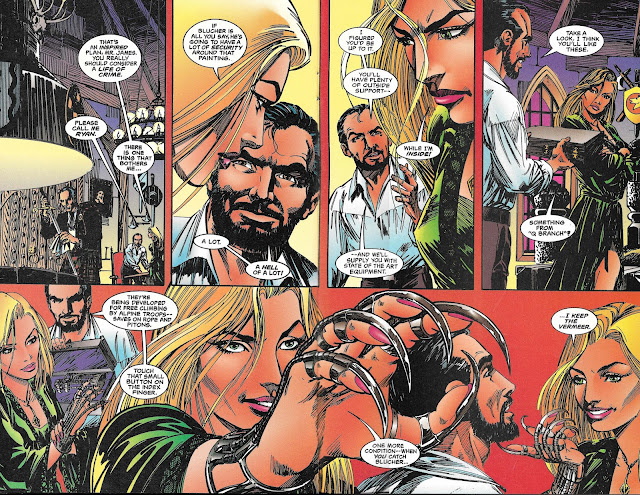 The book ends on a gorgeous double page spread of Maggie parachuting in to “rescue” the Vermeer,… 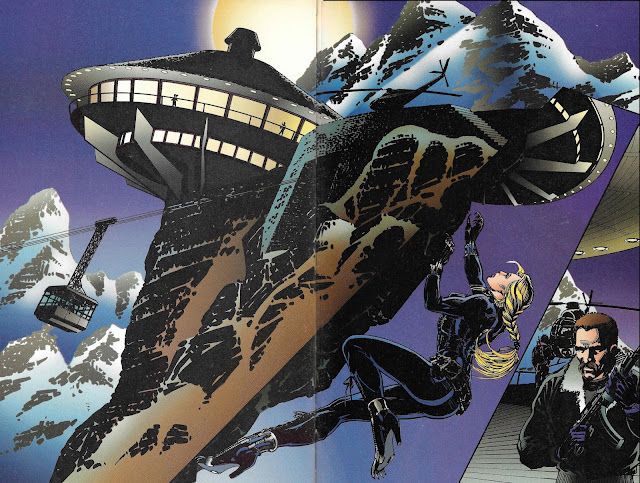 …followed by a single page of her landing taking down a guard. 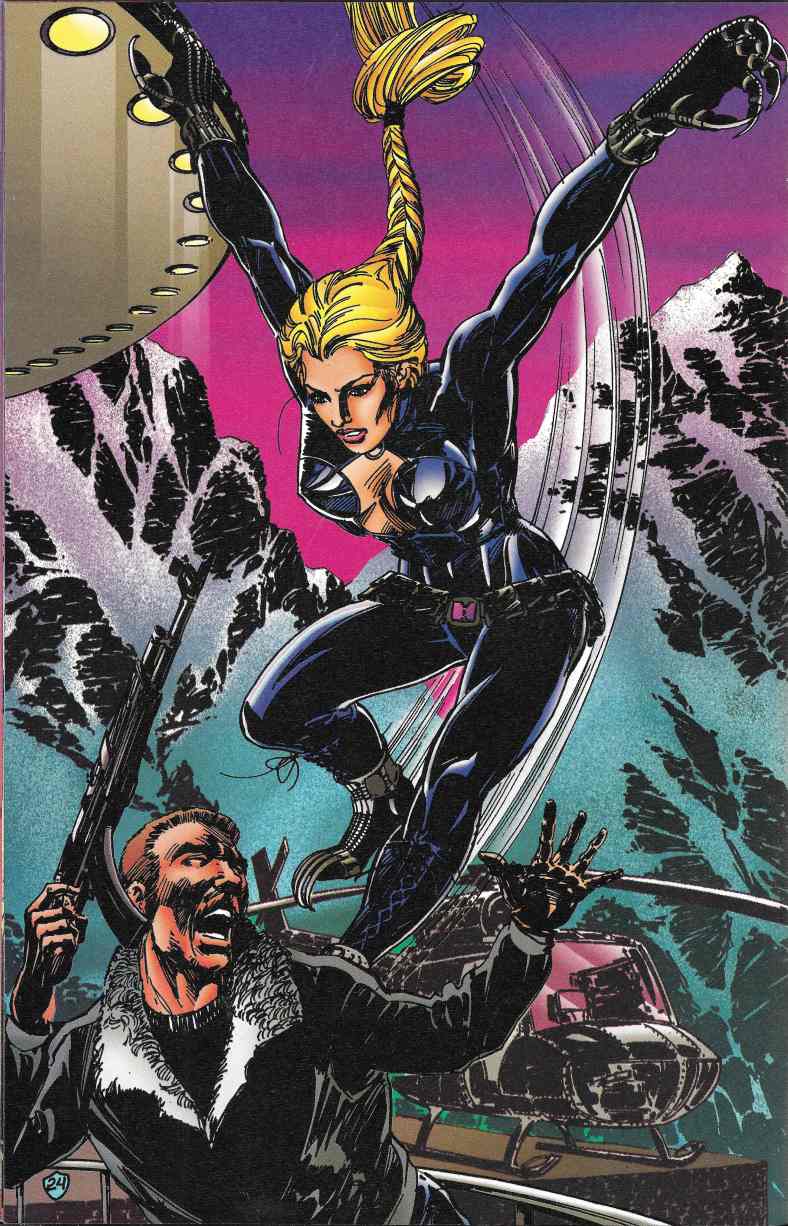 And the crying shame of it all? Two issues. Yes, a book this good gets two issues.

There’s something wrong with comics from the 90’s, I tell ya. The good stuff got buried then forgotten and the fans instead stuck around for weeks waiting for books that were so below average that they show up in multiple copies in the Crapbox all the time. What were they smoking back then?

If you see these in the bins (or those Shaman’s Tears, or Green Arrows from the mid-80’s, or anything that Mike Grell even glanced at), my sound advice is to GRAB ‘EM.

You’ll be glad you did.
Posted by SonOfCthulhu at 2:26 AM