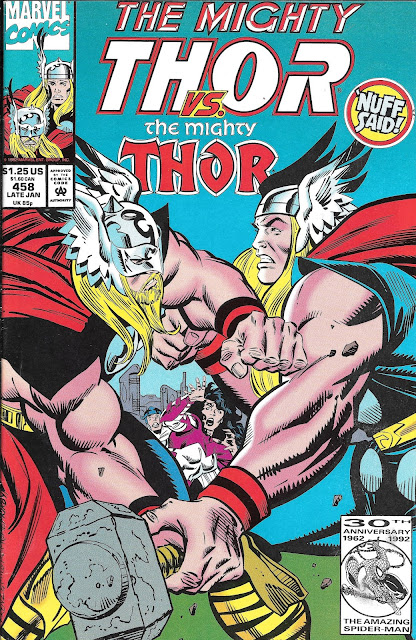 Part 5 of “Stop Hitting Yourself!”

Walt Simonson’s Thor was one of my favorite weekly pickups back in the day. A rare treat, it contained stories that were so damned delightful that I would find myself digging out a few issues prior each time so that I might enjoy the stories he was crafting in long form.

But sadly, all great and wonderous things must end. As Simonson bid the character farewell in Issue number 382, I found myself nervous with who might follow in his Ice Giant-sized footsteps.

The answer was none-other than the skilled Tom DeFalco on writing chores and the pencils of the extremely gifted Ron Frenz. The book took on a new voice, and while it wasn’t awful, I found it extremely simplistic. DeFalco crafted stories the hue closely to the feeling of the original Stan Lee tales, with them being one or two-and-done stories. The grandeur of the book diminished from the ancient and mythic to the more traditional. Similarly, Frenz who I counted as a able artist appeared to be aping Jack Kirby too much to my liking. Every panel felt like a pastiche or homage instead of fresh minted images.

I held on as long as I could, but did not make it beyond a handful of issues before dropping the title. It was decent storytelling, but the price point for comics had risen to .75 and I was buying an armload each week. Thor wouldn’t be the only book to fall under the axe of price increases.

Frenz and DeFalco kept right on going, however. Certainly fill in issues popped up here and there, but the pair had hit a groove that lasted from issue 383 until number 459.

This is the penultimate issue in that run.

Along the way, DeFalco decided to make some changes to the Thundergod, I think in large part to make him more relatable and grounded. To this end, in a book right after I quit picking up the title, Thor became merged with a mortal once more.

The mortal was architect Eric Masterson and after sharing adventures with Thor, the storyline had him take up Mjolnir against Thor’s enemy Mongoose when that villain had laid Thor out. For his trouble he was blasted by Mongoose. After Thor recovered he begged Odin to save Masterson’s life, which Odin did by bonding Thor to Masterson as his alter-ego. He even got the Don Blake cane to tap to call him forth.

During some adventure, Thor winds up killing Loki and this doesn’t sit well with Odin. In the book, Odin banishes Thor, but leaves Masterson with all the power and abilities of the god of thunder. That basically takes the character we know and gives him a modern-day personality, no more “ye ole” English word balloons, and a convoluted family life with ex-wife, son, and girlfriends. Basically: DeFalco wanted to write something other than Thor and this was a way to get to that.

It’s easy to understand. How does one follow Simonson?

So here we are near the end of the Masterson run and I’d play more games of catch-up with you, but it is unnecessary at this point because Masterson himself is going to lay it all down for you. Or rather DeFalco’s exposition dump will… 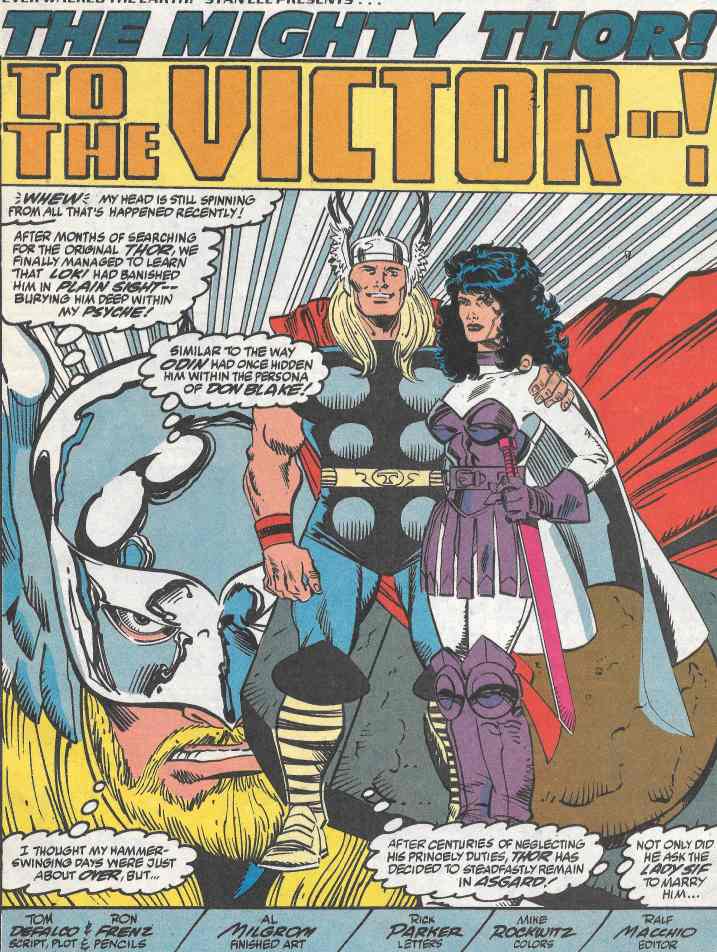 For the TL:DR crowd: Original Thor is back but is staying in Asgard and marrying Sif. Masterson is still a “version” of Thor and still wields Mjoliner and protects Earth. And he even sums up his ongoing home issues. 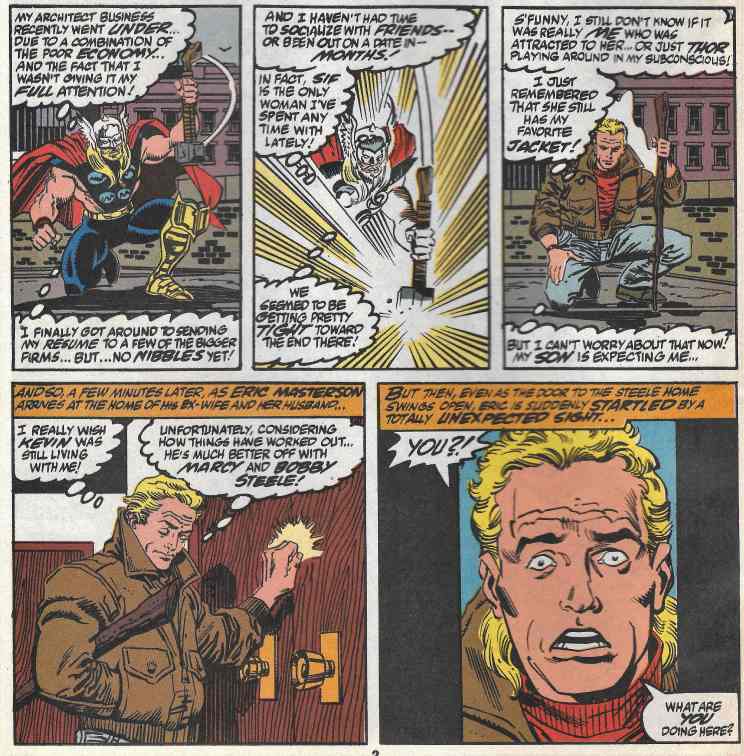 And here is an entire page of soap opera drama so thick that you almost have to swim through it. 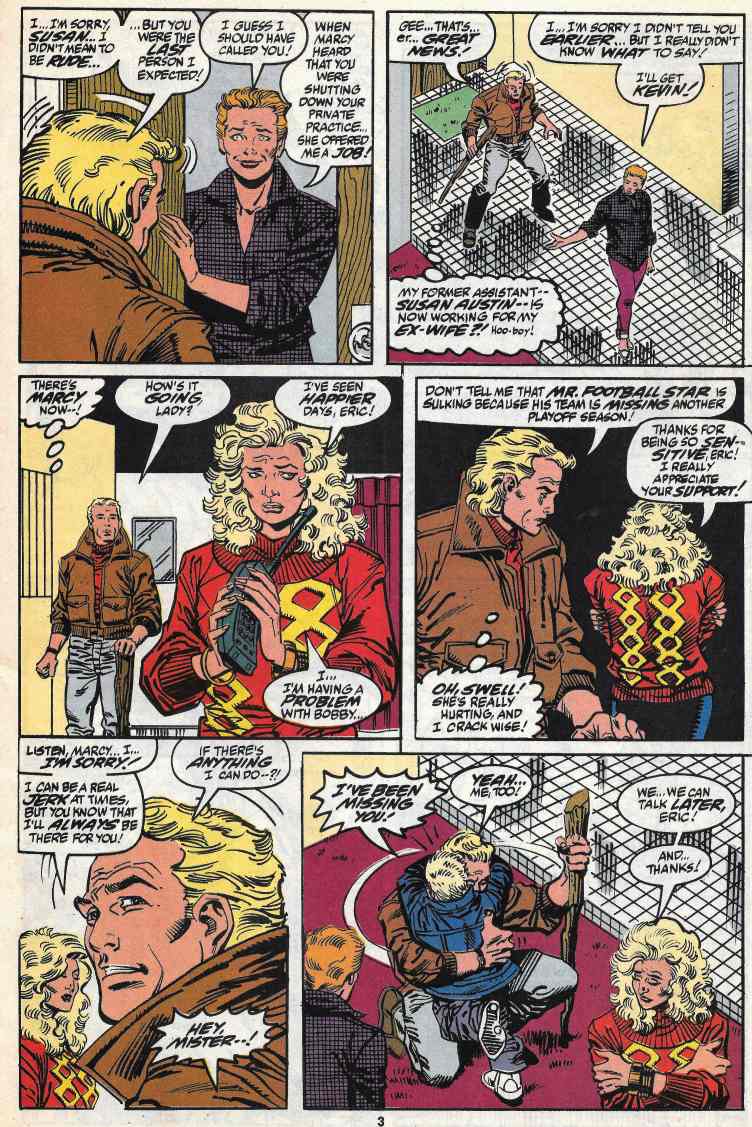 Is it giving too much away to tell you that this is Masterson’s next-to-last appearance in Thor? Possibly. But why would all these characters matter to the audience then? Hang on and I’ll explain why at the end of the article for those of you who haven’t already guessed.

For now though, let’s turn to the other side of the Rainbow Bridge and fabled Asgard, home of Odin, Balder and the real Thor, who for this issue we will label Odinson. In a VERY odd twist, DeFalco has Thor uncaring about any Earthly goings on, being so very much involved in starting his new life with Sif. 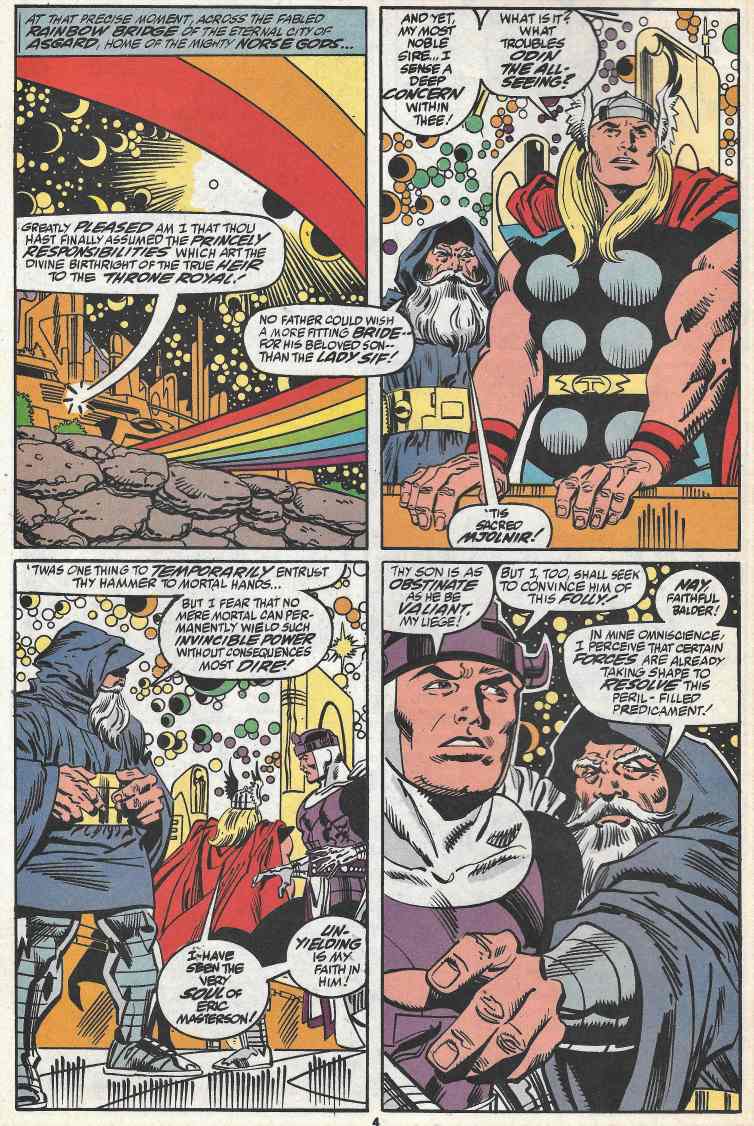 Frenz’s pencils show so much of an homage to Kirby’s style with the character that even his background beg for that bit of krackle. But as you can see there is still something about these shots that seem imitative but not innovative. Like Frenz has a head full of Kirby stock to choose from and he’s photo-editing a series of poses together. I appreciate his talent, but in some ways would love this if Frenz threw out the template altogether and made the character his during the run.

Next we get a full page of family drama between Eric and his son Kevin that sets up further storylines… even though Eric is gone after next issue. And then we get the treat of EricThor foiling a bank heist by four criminals, one of whom is using a powered gauntlet. 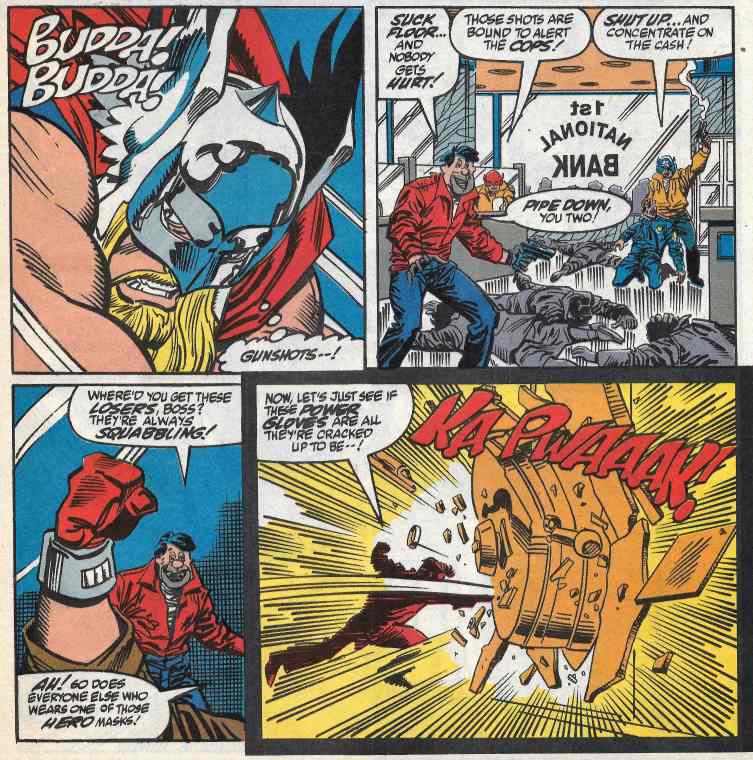 EricThor takes care of “Cap” while throwing him into the guy wearing Flash’s mask (and commenting that it was a shame about his TV show getting cancelled, a reference to the John Wesley Shipp version from the 1990’s) and then downs Fred before he can get a shot off… 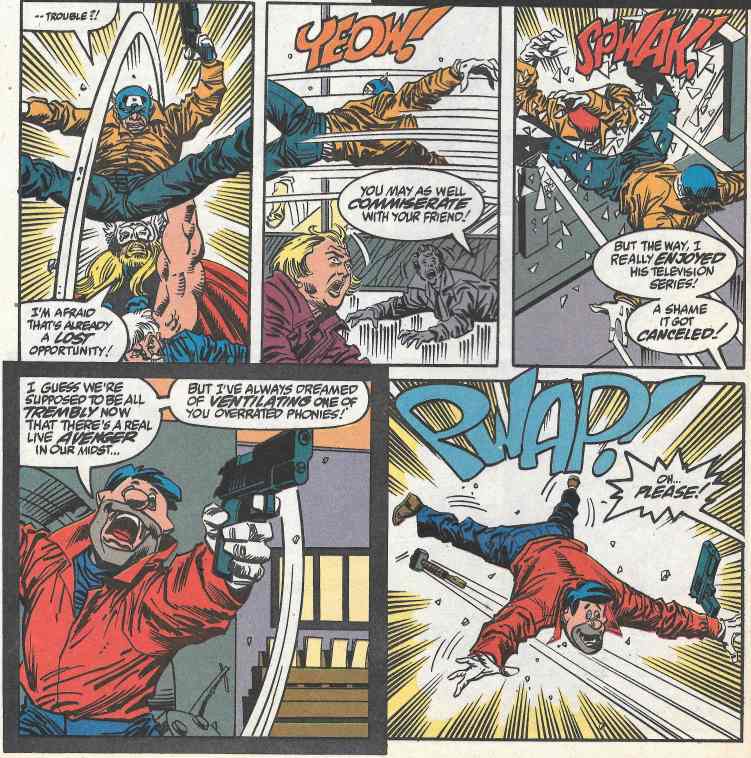 …, which only leaves our guy with the Nintendo Power Glove standing, a guy that Masterson appears to know about from some adventure he’s been on in the future… 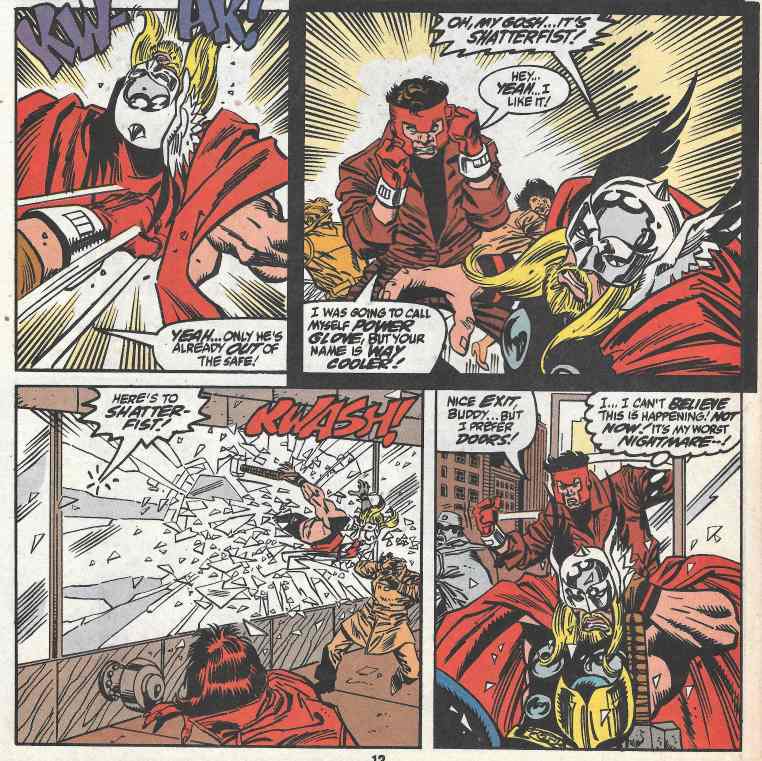 …and this is his worst nightmare because Shatterfist is destined to KILL EricThor and it looks like that might come to pass right now! 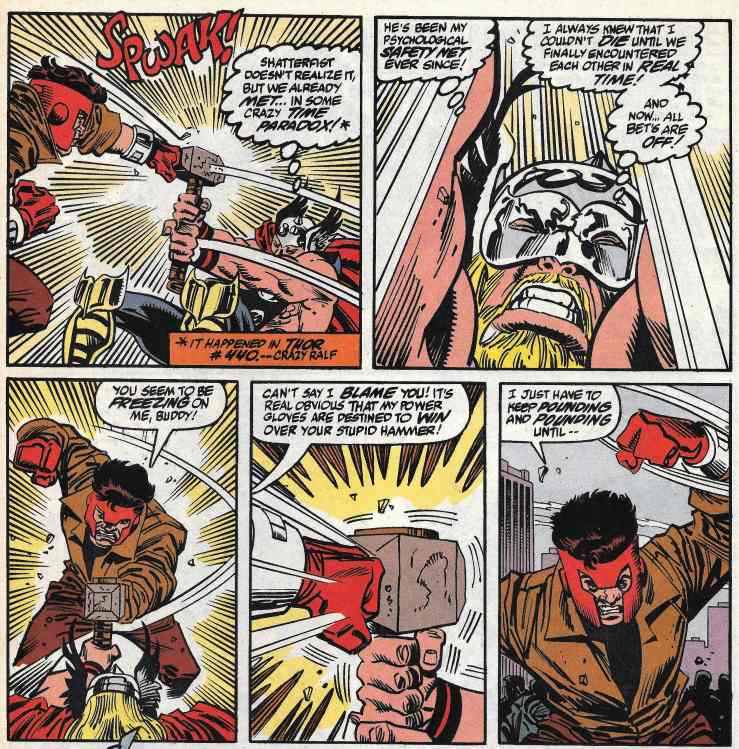 Except it doesn’t because this kindly, old, mustachioed security guard puts the barrel of his gun to Shatterfist’s temple. $10 says he’s played by Stan Lee in the eventual movie. 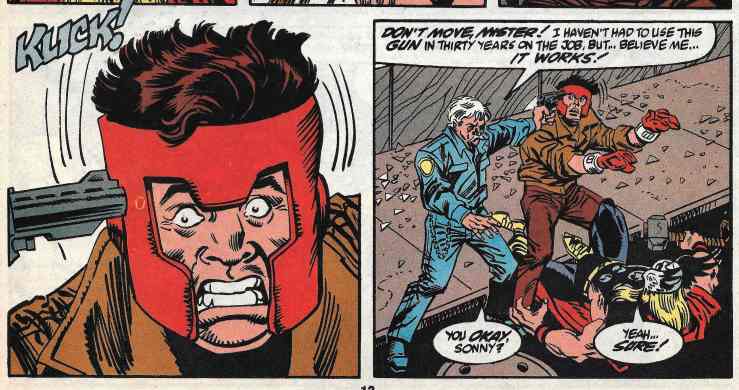 This encounter bother’s EricThor so much that he heads to Avenger’s mansion to speak with one of the few people who could give him some perspective on heroism and mortality. 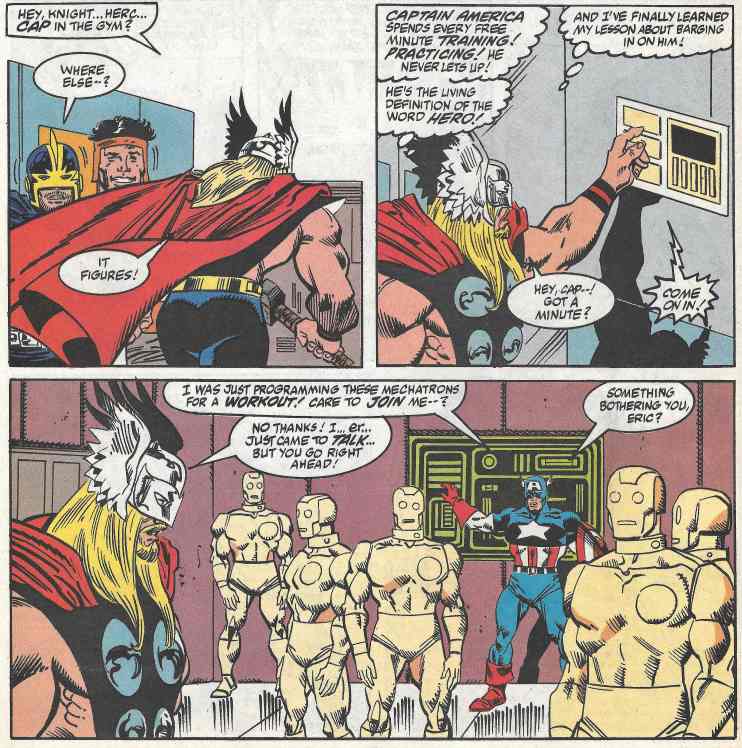 Cap, as always, knows exactly what to tell him… 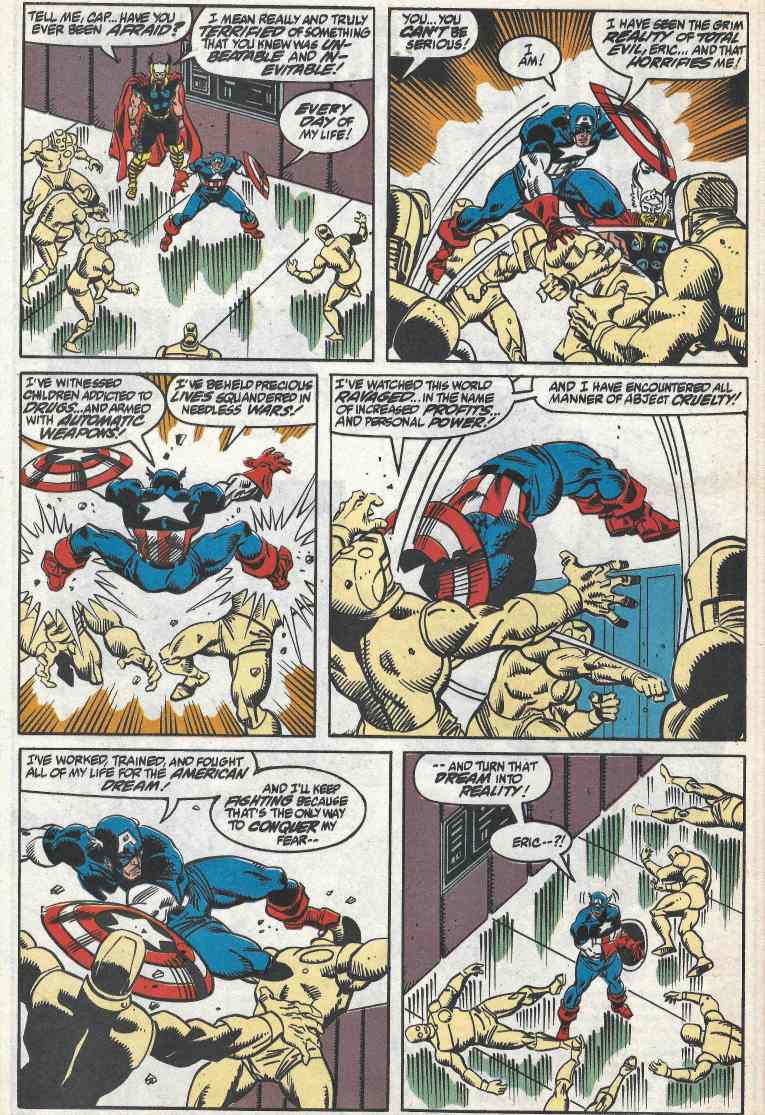 …but EricThor steps out thinking that he’s no Captain America. Sadly he’s no Thor either. What he is, though, is a good friend to Sif, who Jarvis informs him is waiting in the manor’s garden. 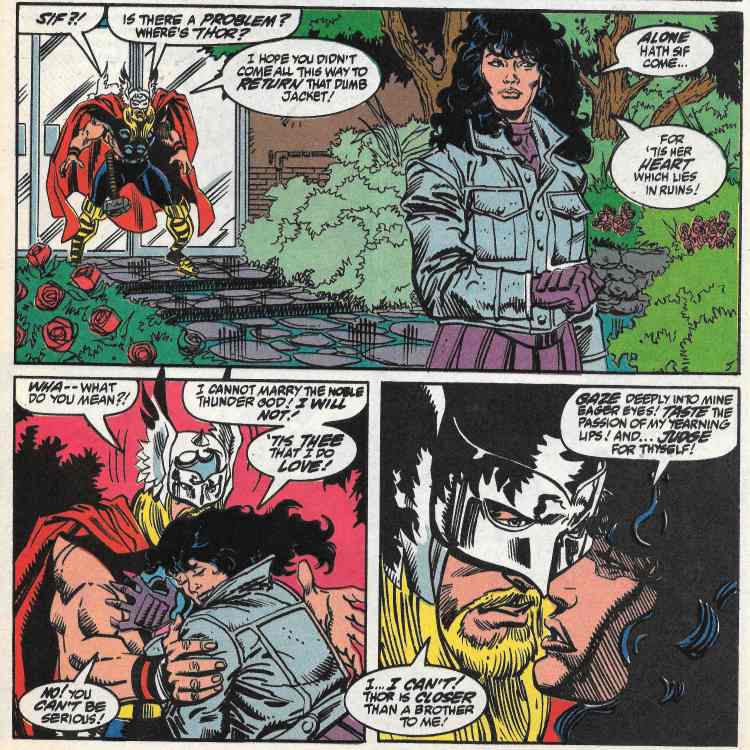 Well, THAT’s kinda awkward! Sif has already given her promise to marry Odinson. I’m sure this will all work out without a fight to the death, though. But that doesn’t appear to be Sif’s designs as she kisses EricThor and is revealed to be the Enchantress. Quickly she sets EricThor against Odinson. 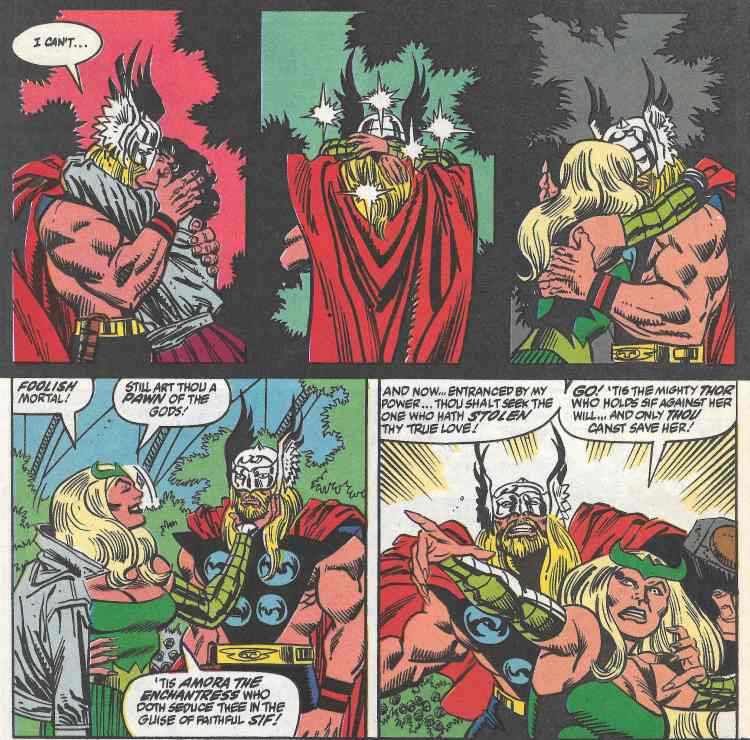 And while Odin catches her in the act, it’s not before EricThor has already “hammered” out of there. 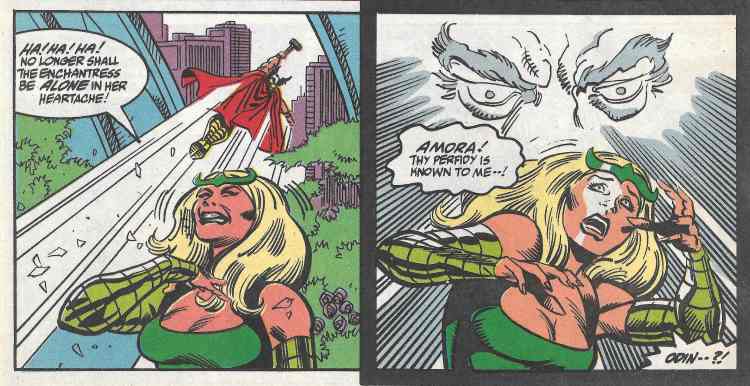 …and back to Asgard, where he comes upon Odinson and Sif enjoying some alone time in the garden. Odinson sees his approach and welcomes him… 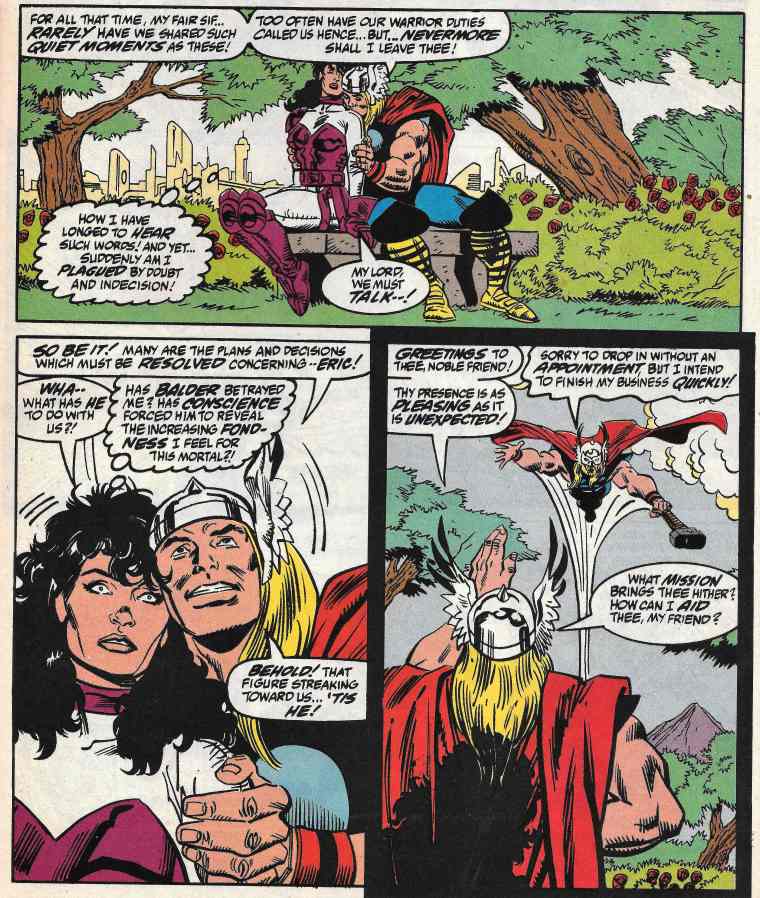 …although the response from EricThor is not at all expected. Odinson takes the brunt a few of EricThor’s worst blows with Mjoliner… 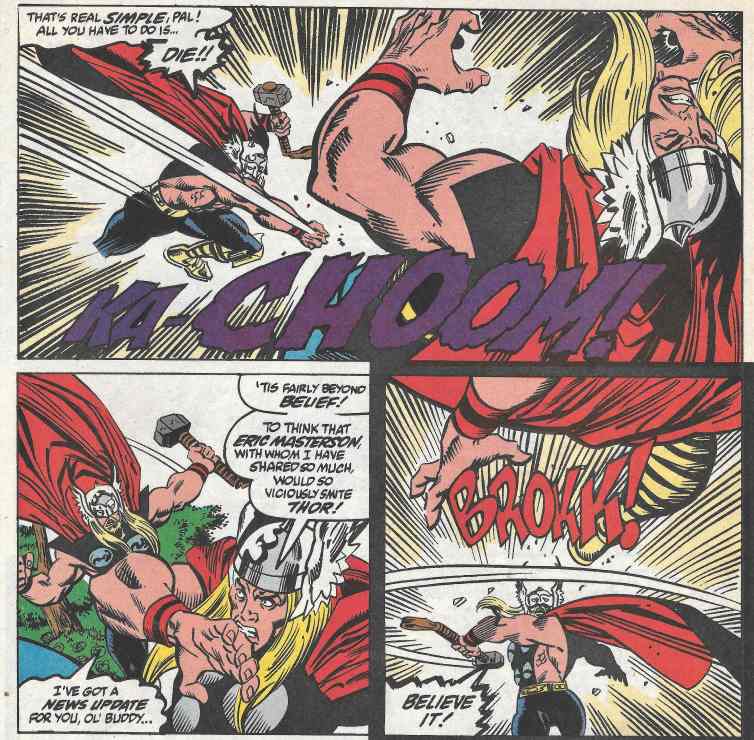 …but even the god of thunder can take this kind of pounding for so long. He starts bobbing and weaving out of the way of EricThor’s clumsy attacks. 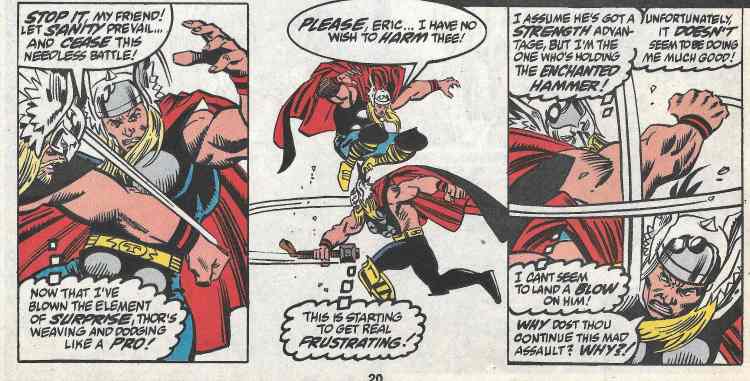 Then the unthinkable happens… 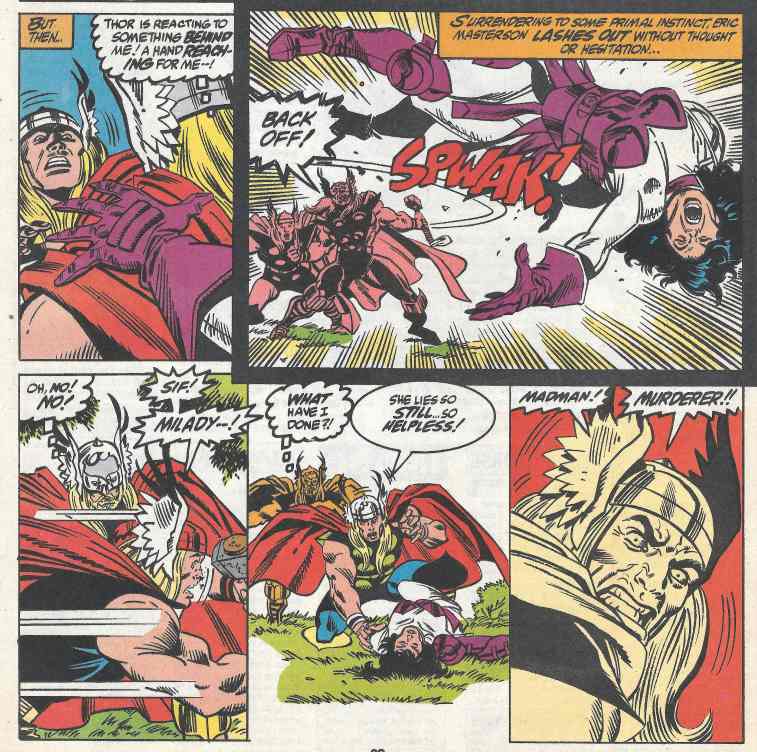 Lady Sif tries to calm EricThor down and gets a face full of Mjoliner’s fury (that should be a drink in the Marvel section of Disneyland). It appears she has been more than just knocked down too, which brings out the REAL THOR in Odinson. With next issue being DeFalco, Frenz, and EricThor’s last, you’d assume that Thor kills him. Not the case, however.

This was the point in the 1990’s where Marvel began the unexpected pattern that would snowball into the 2000’s and beyond: that of cannibalizing their own properties. If one Thor mag was good, why not two – starring two completely different Thors. Thus the Thunderstrike title was briefly born, starring Eric Masterson and his cast of hangers-on.

How this particular battle resolved itself I have no clue. The Crapbox didn’t provide it. For now we just have to be happy we got to see a few blows landed before it was over.
Posted by SonOfCthulhu at 2:49 AM